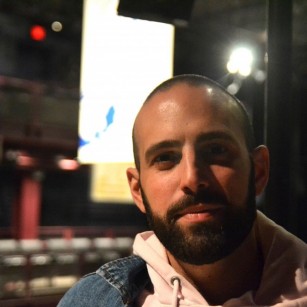 Aaron Ricciardi is a New York City-based writer and performer, originally from Coral Springs, Florida. Aaron’s work has been produced and developed by Clubbed Thumb, the Playwrights Center, the New York Musical Festival (NYMF), Jewish Theatre of Bloomington, Stages Bloomington, and the BMI Lehman Engel Musical Theatre Advanced Workshop, where he is a lyricist. Work includes The Star Killers; Hanukkah Harriet, a play for young people (soon to be published by Stage Partners); Only Child; A Bushel and a Peck; Nice Nails; The Travels: an Epic play with songs (NYMF production); Resting Bitch Face; Can I See Your Face?; and Him & Her & Gay Men In General (national finalist for Gary Garrison National Ten-Minute Play Award). Aaron graduated from the Theatre program at Northwestern University, where he studied playwriting under Laura Schellhardt, and he received his MFA in Playwriting from Indiana University, where he studied under Peter Gil-Sheridan. He is currently a lyricist in the BMI Lehman Engel Musical Theatre Workshop and was recently a Core Apprentice at the Playwrights’ Center and a member of Clubbed Thumb's Early-Career Writers' Group. Aaron is on faculty at SUNY New Paltz in their Creative Writing Program. www.aaronricciardi.com

The Star Killers
by Aaron Ricciardi

Cast:
JACQUI DAWN SMITH: 30s, female. A perennially unemployed actor who lives in Los Angeles, California, and has multiple incongruous day jobs. Her given name was something else, but she changed it (not legally) to “have more star quality.” Her looks are remarkably unremarkable. She’s lived in L.A. since she graduated from a private, conservative Christian college in her home state of Indiana, with a B.A. in Theater Arts. At college, there were only around twenty other Theater Arts majors, and nearly all of them were hobbyists. Jacqui stuck out because of how seriously she took her craft. Her talent as a performer is painfully mediocre, and she has no business pursuing acting as a career, but she has ambition in spades. Plays Woman and Journalist in the scenes from the movie The Star Killers. DONNY CAINE: 60s, male. A B-list—actually, now more like C-list—film actor. He is married to S.E. His goofy looks pigeon-holed him as a “character actor,” but he possesses a bona fide virtuosic talent. Donny was once clean-shaven and rather adorable, but, today, he is slovenly and off-putting, with baggy, dirty clothes and a baggy, dirty beard. Donny’s career began at nineteen years old, when, during his sophomore year of college at a state university in Texas, he was discovered by a respected independent film director. Donny’s deepest desire has always been to be taken more seriously as an actor. Plays The Star in the scenes from the movie The Star Killers. S.E. CAINE: 50s, female. A perennially unemployed former model and actor, who never truly pursued either career. She is married to Donny. Her name is pronounced “Essie,” short for the first and middle names given to her by her parents, whom she abhors. Her beauty could stop traffic, but this is hard to tell these days, since she dresses like she’s in some kind of punk rock militia and since she somewhere along the road became bug-eyed. Though she has never actually made a film, she fancies herself, as she would say, “an auteur.” She is extremely untalented and has poor taste. THE STAR KILLERS: One person, any age or gender. “Very L.A.” Plays all other characters: ACTING TEACHER, DEVELOPMENT EXEC, ACTOR, INVESTOR, PUBLICIST, PERSONAL TRAINER, DIRECTOR, TALK SHOW HOST, PRODUCER, MANAGER, BARISTA, PERSONAL ASSISTANT
Only Child
by Aaron Ricciardi

In a landscape of distorted and fractured memories, a teenage prince meets a lonely schoolteacher and becomes deeply intertwined in her home, her marriage, and her fantasies. As their relationship intensifies, boundaries fall away, familial roles are usurped, and childhood is stolen, changing The Prince's life forever.

a play for young people (to see and/or do)

It’s December. Shayna, the only Jewish kid in her class, would give anything to not have to celebrate Hanukkah and instead celebrate her favorite thing in the world: Christmas! But this all changes when she is visited by the spirit of a bubby from the Old Country, who takes her on a journey through Jewish history, large and small, and teaches her the value of tradition and of miracles, large and small.

Jeff is a Midwestern Jewish liberal who manages a Walgreens. Kirk is a right-wing Evangelical Christian who owns one of America’s largest companies. By day, they lead humdrum lives just like the rest of us, but, at night, these two closeted men rendezvous in an Internet chat room and project their fantasies onto each other. When their love gets all-consuming and all too real, these guys must strip themselves of their digital fictions and make a decision: remain in the closet, or finally live their truth. 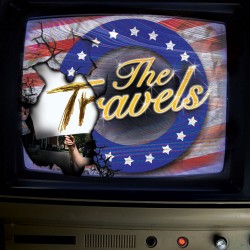 The Travels: An Epic Play with Songs
by Aaron Ricciardi (playwright and lyricist) and Kelly Hoppenjans (composer)

Welcome to the U.S. of A. Other countries suffer biblical consequences for their filthy ways, but the U.S. of A. is the most perfect place on Earth — at least, that’s what Mr. Travel preaches every day on the nation’s only TV show. A trippy dystopian tale with an eclectic soundtrack, this Epic play with songs follows Teeny, Mr. Travel’s rule-breaking daughter. Teetering on adulthood and perplexed by this cruel world, Teeny learns to see past smoke and mirrors… and she starts a revolution. Mashing up styles that range from Brecht to dystopian fiction to South Park, this show turns the genre of musical theatre on its ear. 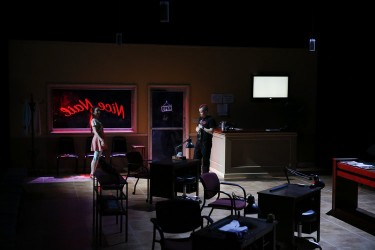 In a nail salon on the outskirts of New York City, immigrant ladies spend their days toiling like servants over the fingers and toes of obnoxious customers. This modest shop is the livelihood of a Korean-American family, who dream of making it big in America—or, really, just scraping by, especially now that the new salon next to the Whole Foods down the street is siphoning off their customers. As word spreads of labor department crackdowns, the salon owners’ daughter fights to modernize this tired establishment, all while growing captivated by a new customer who is not like the others, forcing her to examine the value of identity, government regulations, and Disney movies.

Workshop of The Star Killers at the Playwrights' Center, directed by Portia Krieger. May 2021.

The Travels was produced as part of the 2014 New York Musical Theatre Festival. It was directed by Travis Greisler and produced by Cohen Theatrical. The cast featured Luba Mason and Michelle Rios.