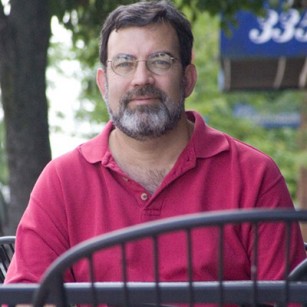 A Louisville, Kentucky playwright, director, and dramaturge. Prior to Louisville, he spent three years in Bermuda and four years teaching playwriting at The American University in Cairo, Egypt. Coash was a Co-founder of the Offstage Theatre in Charlottesville, VA and has worked for such theatres as the Manhattan Theatre Club, Stageworks/Hudson,  and Actors Theatre of Louisville. Coash has won numerous playwriting awards including Ensemble Studio Theatre’s Hammerstein Award, The Kennedy Center’s Lorraine Hansberry Award, and a Jerome Playwriting Fellowship. His plays have been produced at such theatres as: Portland Stage, the InterAct Theatre, Abingdon Theatre, Ensemble Studio Theatre, Bailiwick Theatre, West Coast Ensemble, and many more. Coash was the recipient of a CT. State Artist Fellowship. His play CRY HAVOC was recently produced in the South African National Arts Festival where he was an artist-in-residence. His new play VEILS was recently named winner of the American Theatre Critics Association's "M. Elizabeth Osborn Award" as well as being named a Finalist for the Steinberg/ATCA Award. VEILS was also the Clauder Competition for New England Playwrights Winner and a recipient of the Edgerton Foundation National New Play Award. Coash has an MFA in Playwriting from the University of California at Davis. 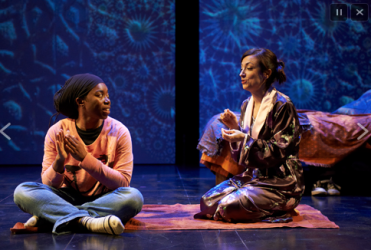 Intisar, a veiled African-American Muslim student, thought she might finally fit in when she enrolled for a year abroad at the American Egyptian University in Cairo. Samar, her Egyptian, non-veiled roommate, enlists Intisar’s help in creating an internet blog about the controversial practice of wearing veils..or not and hopefully helping to bridge the gap between the West and the Middle-East. They and their project, however, are overtaken and in danger of being overwhelmed by events leading up to and including the beginnings of the recent Egyptian revolution. In struggling with events such as a university ban on wearing burkas, an anti-American protest/riot, and Samar’s arrest and forced virginity test, Intisar and Samar are surprised to find themselves on opposite sides of a bitter cultural divide. Will the violent events and emotions leading up to the revolution salvage their friendship or shatter it?

Cast:
CAST: Intisar and Samar are college roommates, living in a dorm at the American Egyptian University (AEU),Egypt. Intisar - Female, African American Muslim, 20-23years old, wears a veil (hijab) that is wrapped snugly around her head covering her hair but not her face. "Inti" is a strong-willed, intelligent, passionate young woman who is doing a year abroad at the American Egyptian University, a Middle-Eastern Religious Studies major. Samar - Female, Egyptian Muslim, 20-23 years old, does not wear a veil. Samar dresses in chic, western clothes, modestly dressed when she goes out, not so modest at home or among friends. She often wears a NY Yankees baseball hat. She is also a student at AEU, studying journalism. Well off, cosmopolitan, speaks Arabic, French and English. 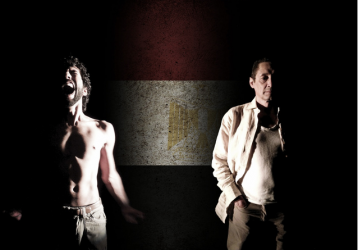 Set in present day Cairo, CRY HAVOC explores the troubled relationship between the western world and the Islamic Middle East. Cultural imperialism, religious fundamentalism, political repression, and personal sexuality are deftly unfolded in this tender and shocking play about the dissolution of a loving relationship between a British expatriate writer and his young Egyptian lover. Both men are forced to examine the fine line between conviction and obsession as they confront a repressive government and their own identities.

Cast:
Nicholas Field, British male, 30-35. Gay, expatriate historian and translator of Arabic love poems. One of the many ascetic, itinerant British scholars one finds in almost any exotic locale. Loves Egypt for it’s mystery, chaos, warmth, excitement, and young men. Rumpled clothes and life style, brilliant mind. A bit naive. Excited and excitable. Speaks fair Arabic. Has been in Egypt about six months. Mohammed El-Qahira, Egyptian male, 20-25. Good looking, normally fresh-faced and full of life. A recent university graduate with a degree in British Literature. Speaks fairly fluent English. Has always felt a bit out of place in his homeland and had a deep desire to be in England, the land of Shakespeare, Sherlock Holmes, and Joe Orton. He does, however, have deep feelings about Egypt which rise to the surface as the play continues. Has loved Nicholas very much and still does. Ms. Nevers, British female, between 40-60 years old. Very efficient British visa officer. Stiff upper-lip but with hidden reserves of passion. Extremely well read and professes a great love for all things British, even though she’s spent a great deal of time living in foreign climes. She’s searching for something. Love? Meaning? A great believer in truth.

UKIWMI by Tom Coash was Co-Winner of the Bijou Theatre Playwriting Competition, Bridgeport, CT. Judges were Terrence McNally and Tom Kirdahy! UKIMWI is one of three one-acts in Coash's CAIRO STORIES.

VEILS by Tom Coash will be produced as part of the terrific "Women and War Festival" in London, UK,  July 6-30, 2016. Link to site: http://www.womenandwar.co.uk/#!veils/uod2l

Tom Coash's two one-acts, UKIMWI and VEILS, are being produced in the Edinburgh Fringe Festival under the title, LUNCH IN CAIRO. Aug. 14-31 at the Assembly Checkpoint: https://tickets.edfringe.com/whats-on/big-bite-size-lunch-hour-lunch-in-...