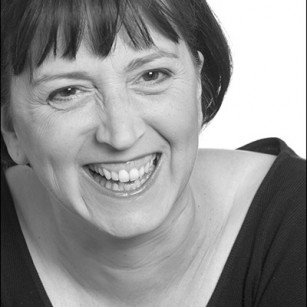 D.W. Gregory is a former Core Writer and currently an Affiliated Writer with the Playwrights' Center. Her plays frequently explore political issues through a personal lens and with a comedic twist. The New York Times called her "a playwright with a talent to enlighten and provoke" for her most produced work, Radium Girls (Playwrights Theatre of New Jersey), about the famous case of industrial poisoning. Other plays include Memoirs of a Forgotten Man, which received a National New Play Network rolling world premiere (Contemporary American Theater Festival, Shadowland Stages, New Jersey Rep); Molumby's Million (Iron Age Theatre), nominated for a Barrymore Award by Philadelphia Theatre Alliance; The Good Daughter and October 1962 (New Jersey Rep); and a new musical comedy, The Yellow Stocking Play, with composer Steven M. Alper and lyricist Sarah Knapp. She has written a number of one-acts as well and is a two-time finalist for the Heideman Award at Actor's Theater of Louisville, where her comedy So Tell Me About This Guy was produced on a bill of short works. Gregory also has a soft spot in her heart for large-cast plays, and thus, frequently writes for youth theatre.  Her drama Salvation Road was the winner of the American Alliance for Theatre in Education's Playwrights in Our Schools Award and developed through New York University's New Plays for Young Audiences program. For three years in a row, Dramatics Magazine listed Radium Girls among the 10 Most Produced Plays in American High School Theatre. More information at www.dwgregory.com and on her page at the New Play Exchange.. 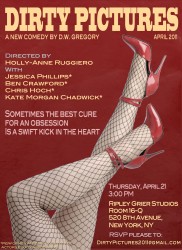 A bawdy stage comedy play about four lives transformed by the discovery of 21 shocking photographs.

One night in a Colorado roadhouse, in the depths of the Reagan recession. Judy, the sharp-witted bartender, never lets her disability get in the way of what she wants—except when it comes to her boss, Dan, a big-hearted guy with no head for business, who is busy working out his issues—once again—with his girlfriend Bonnie, a waitress so comely that guys give her $10 tips just for wiping up the beer she spills on them. Only Chet, a steady customer, gives Judy a second look, but she’s got no interest in an out-of-work meatpacker who imagines himself the next Ansel Adams. It all comes to blows one Monday night when Judy decides to make her play, unaware Chet has cooked up a convoluted scheme to woo her that involves a clandestine photo session with Bonnie and a secret trade for a classic motorcycle. A deceptively subversive small cast comedy stage play about redefining beauty in an image-obsessed culture. 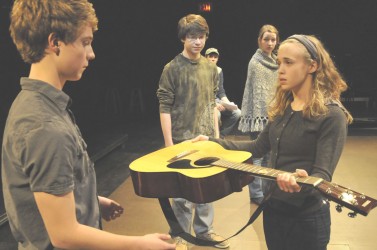 Two guys. One rusted out Honda. Twenty-four hours to separate a girl from her guru. The road to Hell was never more fun.

When his hip older sister Denise disappears with members of a fundamentalist church, 17-year-old Cliff Kozak struggles to hold it all together, pretending that he isn’t hurt by her decision to cut him out of her life. But a year later, a chance sighting of Denise at a New Jersey strip mall leads Cliff and his best buddy Duffy on a road trip into the heart of a deepening mystery. Why would a smart and talented girl like Denise fall for the hollow promises of a sleazy preacher? Could it be that blind faith is just another term for a desperate need to belong?

Cast:
3M, 3-4 F A large-cast version is also available from Dramatic Publishing, with parts for up to 16 actors--5-6M, 9-10 F, and was produced at New York University's Steinhardt School and Walden Theatre, Lousville, Ky. 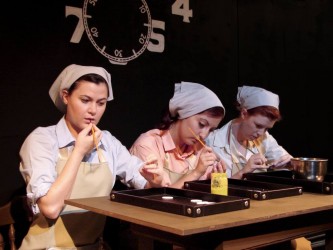 1926. Radium is a miracle cure, Madame Curie an international celebrity, and luminous watches the latest rage. Until the girls who paint those watch dials begin to die. Based on the true story of the women and men who worked for the U.S. Radium Corporation in Orange, N.J., Radium Girls is a fast-paced examination of the commercialization of science and the twin American obsessions with the pursuit of health and wealth. Available from Dramatic Publishing.

Cast:
Written for an ensemble of five women and four to five men, doubling into 38 parts.
DESIGN
by D.W. Gregory

Claire and Len, newly married, move into their dream home in a idyllic, wooded subdivision.  An added bonus: Len’s older friends Hal and Beth live just across the lake. But when Len’s chance remark at a party triggers the breakup of the other couple, Claire realizes they are in for some seriously bad karma. A dead crow shows up on the sidewalk, and the sky takes on a sickly hue. The clincher is when a shot rings out across the parking lot of the Safeway—striking down the first victim of an anonymous, serial sniper. Troubled by these events, Claire sets out to restore order by helping Hal to reunite with Beth. But she quickly discovers a tangled history between Len, Beth, and Hal that throws her onto a completely different question. Who is this man she wakes up next to every day? And as the killer moves in, both Len and Claire struggle with the trade-offs they have made between satisfaction and security. A post-9/11 comedy about learning to thrive in an age of uncertainty. 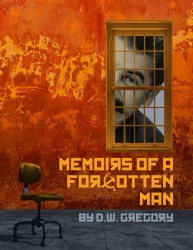 Memoirs of a Forgotten Man
by D.W. Gregory

A Soviet journalist with the gift of total recall. A psychologist seeking to rehabilitate herself. A government censor with a secret past. Over two decades their fates become entwined as victims and collaborators in Stalin’s campaign to rewrite public memory.

Long before ‘fake news’ was an Internet meme, it was called propaganda. And in the Soviet Union, circa 1938, it was the grease that kept Stalin’s machinery of terror in motion. By taking us to this world, where justice is arbitrary and freedom as we think of it does not exist, Memoirs of a Forgotten Man forces the audience to consider the fragility of democracy in an era when facts are fungible and history is whatever Dear Leader says it is.  Produced through the National New Play Network's Rolling World Premiere program.

Memoirs of a Forgotten now appears in an anthology: Five Plays by Women from The Contemporary American Theatre Festival, published by Bloomsbury Press, an imprint of Methuen Publishing.

Memoirs of a Forgotten Man is receiving the second of three productions as part of a National New Play Network rolling world premiere. It opened at Shadowland Stages on June 1 and closes June 16, directed by Brendan Burke. The next production, at New Jersey Repertory Company, opens August 15.

Memoirs of a Forgotten Man, by affiliated playwright D.W. Gregory, is scheduled for its world premiere at the Contemporary American Theatre Festival in Shepherdstown, West Virginia, July 6 - 29.

SALVATION ROAD closed a successful run in the Capital Fringe Festival this summer -- selling out the last two performances and earning rave reviews in local media.