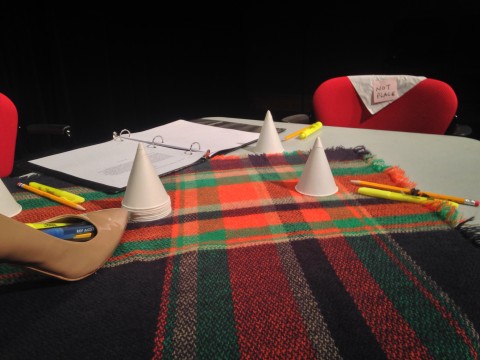 To witness the final production of a play is always entertaining, but to be a witness to the beginnings of a new, collaborative work is a uniquely significant occurrence. Such was my experience as an intern for theater artists Katie Bender, Rachel Mars, and Gabrielle Reisman who shared an intimate week in workshop together at the Playwrights’ Center in April, 2017. The trio of artists were cultivating the genesis of their new play, Next Year People, with laughter, tears, and robot dances—lots and lots of robot dances.

Three brilliant minds from different parts of the world wanted to come together to make a play, and Reisman’s Core Writer development funds from the Playwrights’ Center gave them that opportunity. Bender and Reisman have collaborated on projects before as part of their Underbelly theater collective, and they met Mars for the first time two years ago at the Orchard Project. There, according to Bender, “we sort of fell in love with each other and were like, ‘We don’t know, we don’t know, we just love each other!’ And then we looked for grants to do some kind of exchange. Basically, we were just trying to spend more time together.” Bender is in residence at the Playwrights’ Center this year as a Jerome Fellow, and Reisman is in her first year as a Core Writer with the Center, which provides her with funds to travel to the Center and work on whatever she would like. She chose to bring Mars in from London and spend a week experimenting in the theater with her two collaborators.

Their reunion was long-awaited and much anticipated, and the goal was seemingly simple: to begin a play. After meeting the trio and becoming acquainted in the space at the Playwrights’ Center, I found that such a feat requires an incredibly rewarding and profound process of discovery. The workshop itself consisted of five, five-hour long days, with a presentation of their work on the final day.

Over the last year, Bender, Mars, and Reisman discussed some topics of interest—women, growing old, elderly couples and their relationships, comedy duos—and set up a website where they posted things that inspired them and some exploratory writings. Then, after the Brexit vote and the U.S. presidential election, the ideas shifted focus. Reisman says, “we saw each other the week after the election and threw out some ideas on what the play could be about—‘Badgers!’ ‘Lady Arran!’ ‘Seeking pleasure in times of destruction!’—and then that grew into a collection of ideas, but it was pretty certain that until we got in a room, the three of us, it was all unknown.”

And so, with hearts filled with happy reunion and heads filled with post-election motivation, the three began the first day by reflecting where their partnership began. Situating themselves in three chairs, they asked me to record their conversation of how they first met. The energy of the theater altered immediately into something deeply personal and sacred. As both intern and audience member, I delved into the lives of three people whom I had nearly just met—three friends, theater makers, and new collaborators who were prepared to let go of their discomforts for the sake of building a new play from personal experiences. “It’s potentially very exposing,” Mars remarks, “The stuff we’ve been doing. It is exposing. But I think I’ve been surprised by being like ‘Well alright then, I’m going to expose myself. You’re going to see some ugly shit, some things that fail. And it will be alright.’ But that comes from two years of knowing each other. Or an instinct. I don’t know if we’d be in this room if there wasn’t an instinct. I don’t put myself in places where artistically I’m going to be judged.”

After the trio wove in and out of conversing about how they met, the exercise was repeated, only this time, they made up the story and built upon each other’s fantasy-filled fabrication. “We sort of told a choral story about our meeting the first time and also an imagined story of us building utopia in the Virgin Islands,” Reisman reflects. As we ended for the day, the trio discussed their plans for their time together, which included finding a speak-easy and taking a beginner’s kickboxing lesson, all for the sake of furthering their play, of course. I learned that they were staying in a house with each other during this creative process, and, to me, the utopia felt as though it was coming to life in more ways than just making a play.

The following morning, we all checked in with one another, an exercise and act of compassion that became ritualistic for the four of us at the start of each day, as well as engaging in the Jerzy Grotowski cat exercise, led by Bender, and numerous vocal warm ups, led by Mars.

Audio extra: Hear a soundscape of these warm-up exercises from the Next Year People workshop

The atmosphere felt fresh and rejuvenated, and the three began to discuss phrases and themes relating to a utopia that were then written down on cards. During the next exercise, each artist entered the stage from behind the curtain, picked one of these cards at random, chose a song in the time it took for them to walk from the stage to the sound booth, then created a dance inspired by the phrase and danced it for the song’s entirety. The phrases, which ranged from “Speedboat Dance” to “I’m Fine I’m Fine,” were a complete stream of consciousness that the dances manifested physically. For example, Bender pulled the “Future Robot Dance” card and fittingly chose to emulate it with Daft Punk’s “Get Lucky.” Unaware that the song was over six minutes long, she remained onstage and explored all the quirky movements of a robot, which included being “stuck” and continuously walking into a wall for over a minute.

The robot dance resonated, and the trio quickly decided that having a Future Robot Dance in the final presentation was necessary. We looked at robot dance tutorials online and, for the remaining hours of that session, the trio locked themselves away in the green room to choreograph their newest vision. I sat in the theater and awaited the final product. Sweaty and serious, the three artists performed their Future Robot Dance as I recorded, once again the sole audience member to observe the playful integrity of this trio. Such an integrity is filled with a commitment to discover art through love and exuberance.

As we moved further into the week, the artists leapt further and more fearlessly into their work. They communicated swiftly with a keen openness and care for each other’s words. They performed exercises without any reservation. The final presentation to Playwrights’ Center staff and friends was a success, and parting came with a simultaneous triumph and lament.

Still, a month later, the raw beauty and sheer wonder of the workshop remains with me. The evolution of its process became ceremonious. During a final exercise one day, the artists created a dinner scene by utilizing random objects, along with being seated at the table themselves, to fashion the final tableau. Theater lights were dimmed, and the only light reflected was the natural light from an open door. They placed music stands at varying heights to mark a grand entrance for their guests, who never came. Stoic, present, and remaining at the table with one another, they gave a toast to the moment and confirmed the sanctity of the space, the importance of their work as three companions, and the utopia they unknowingly unveiled. “I was thinking,” Bender affirmed, “that we’re women who love each other and who have been super generous with each other and that—yeah, I think that feels radical.”