Jerome Fellow Tim J. Lord is workshopping Fault & Fold at the Playwrights’ Center this week with director Nicole A. Watson and actors Carley Rosefelt, Imran Sheikh*, Annie Schiferl, Peter Christian Hansen*, and Taj Ruler (*Member of Actors’ Equity Association). In the play, the lives of a brother and sister in Iowa become intertwined with a brother and sister in Afghanistan following an act of violence. In order to move on, they look for ways to bridge the distances between one another, a journey that will cross continents and cultures and delve deep into the earth. Join us for a free public reading of the play on Tuesday, April 17 at 2:30 p.m.

We asked Tim a few questions:

Some of your plays are focused on the rural midwest of the U.S. What interests you about that region?

It’s not a place you see onstage all too often and when you do the characters are often clownish hicks. To me the Midwest is as diverse and complex as the country as a whole, so it’s a landscape I keep returning to in my plays even though I haven’t lived here since 2001. I grew up in the Missouri suburbs and went to undergrad in rural Illinois, so all my early road trips involved crossing that world—it takes a long time to escape it, and it all seems so monotonous. But the deeper you delve into it, the more interesting it is. Like, Southern Illinois seems like it’s all boring farmland if you stick to the interstates, but when you get off onto the rural routes there are crazy bluffs and sudden valleys. And down near the confluence of the Ohio & Mississippi Rivers, there’s an energy that’s hard to describe—I think it’s that you’ve got these two massive rivers coming together and you can feel their power and the fact that they could wipe out anything that humanity has thrown in their way, so there's that tension between needing the rivers and being fearful of them.

You also engage with a number of myths and themes from various classical and religious texts (Thebes, Sparta, Hell, etc). What can these ancient elements add to a contemporary play?

Anne Bogart talks about how we’re “living in the space between mythologies,” and that it’s the artists who shape the new myths. That’s an idea that resonates with me as I’ve long felt stuck between old ideologies and whatever is to come. So when I engage myth and religion I usually tear them open to look at the insides and see how they work. I ask why their themes are considered “universal,” and why or whether they’re still relevant—usually parts of them are or the act of interrogation grants insight into why they once were relevant. Then I put these myths back together in my plays—usually resetting them in contemporary, Midwestern location. Sometimes you’ll recognize the foundational myth; sometimes you won’t. Hopefully, though, the original myth shines a new light on our contemporary moment.

Describe an “aha moment” or moment of discovery that you’ve had during the writing process.

I’ve spent the last five years working with and for the 52nd St. Project in New York—they pair kids from Hell’s Kitchen with theater artists, and the first program the kids do involves writing a play that professional adult actors perform. When we’re teaching them how to write a play they learn that every character has a wish. But in the professional world we usually talk about characters having wants, so I was really interested in why we taught it that way. It finally occurred to me that “wants” are often practical things, while “wishes” can be totally fantastical and that really opens up the possibility of what a character can want and how s/he can get it. So these days I prefer to talk about what a character wishes for.

What play do you wish you had written and why?

The stage adaptation of The Very Persistent Gappers of Frip. It’s this wonderful children’s book by George Saunders and I started an adaptation of it for a class at UCSD. Everyone loved it and told me to get the rights, but a month later I learned someone already had them and the play was premiering soon at the Mark Taper Forum. (I’m told my version was better. At the very least, I really loved the scenes I wrote.)

Always challenge yourself and your colleagues. Praise is cool and all, but tough questions are what make a good thing great.

I can’t think of any particularly weird phrases that I’ve Googled, but I’m dead certain that I am on the NSA’s radar as a result of my Google searches. I also get lots of random emails from Russians asking to read my play, We declare you a terrorist… (which is about the 2002 Nord-Ost hostage crisis in Moscow). My play is not kind to Putin and Putin kills people, so I don’t answer those emails.

A play called The Hard Price, about the boom-bust cycle in North Dakota’s oil country; and an adaptation of Oedipus where Oedipus isn’t an onstage character. Instead it tracks the women of Thebes who are caught up in Oedipus’ attempts to “cure the town.”

The most recent, really thrilling experience is that I did something I’ve never done in the theater (also at the 52nd St. Project): I got to design the sound for a show. We were in a bind finding a designer so I volunteered and had a blast. In addition to getting to pick a lot of great music I also had to figure out what a rainbow poop sounded like.

Branden Jacobs-Jenkins has been really blowing my mind the last few years. From Neighbors to An Octoroon and Everybody, I love how he’s able to grapple with these old plays/styles and to create these funny, challenging plays that are both true to and critiques of their source plays.

And then the work that Stephanie Ybarra is producing with the Public Theater’s Mobile Unit is really inspiring—it’s some of the best productions of Shakespeare I’ve ever seen and it’s all created with small casts, zero sets, and minimal costumes. If there are sound cues they’re created live or played on a boombox. The performances are always great, the direction is ingenious, and the mission of bringing it to underserved communities in the New York area for free reminds you of what theater was created to do. 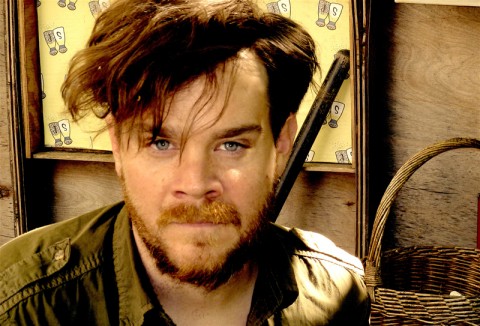