Many Voices Fellow Stacey Rose is workshopping Legacy Land with director Hayley Finn and actors Thomasina Petrus*, Antonio Duke, Ivory Doublette*, and James A. Williams* (*Member of Actors' Equity). We talked to Stacey last summer about her writing life; that interview is below.

How does being a parent influence your writing?

Having a Black son (and two brothers, and four nephews) pushes me to dig a little deeper when creating Black male characters. I try to craft them into the complex beings they are and give them as fair a shot as I’d want someone to give my child. My son produces music and writes songs. We talk at length about the necessity of honesty in what we create. I always push him towards writing from a place in authentic to his experience. Because of this, I have no choice but strive toward the same in my own work.

You’ve written for the stage as well as for TV. How do you approach writing for one versus the other?

Playwriting is like dreaming awake for me. It’s all instinct. I’m hit with a question or moved by a situation. I chew on it in my mind for a while, then more often than not, I take to a moleskin first, writing long hand until it’s either no longer practical or I become stuck. Then I start to transcribe, and things get clearer. I keep going in 1-2 hour spurts daily until I have a full draft. I have a handful of people who I’ll take initial impressions from, but for the most part I don’t want to hear any feedback until I’m pretty solid on what I feel the piece is trying to say. In this way, playwriting is really personal for me.

My “brain” for writing teleplays is quite different. It’s formulaic. Part of that is from grad school training, the other part is having been a sickly kid who watched HOURS of television every day and because of that having a good sense of what type of teleplays I like. I start with a beat sheet, which helps me get a very basic idea of the story I’m trying to tell.  Then, I write a detailed scene-to-scene outline. It’s helpful for me to receive notes even in these early stages, because I understand, how collaborative writing for television is (even more so than theatre), the earlier I learn to let go, the better off I am. Once my story has good bones a strong outline provides, I can layer the flesh and other gushy parts on them. I add, subtract, multiply, and divide, until I have a solid story that lives very comfortably in the selected (half-hour or one hour) format.

Kara. Walker. her art is simply amazing. I’m painfully jealous and simultaneously in awe of her. She says everything in her visual work that I strive so hard to with words. She makes it seem effortless.

Roxane Gay. Because she ran all through my psyche with Hunger and frees me to define my feminism/womanism however I damn well please.

James Baldwin. Because he dared to be Black as possible, Queer as hell, and long winded in a time when people like him were expected to lay down and die.

Suzan Lori-Parks. The way she observes the world, lays it out on the page, then expresses it on puts it on the stage is endlessly inspiring.

Stephen King, Rod Serling. They shine a light on what appears to be the underbelly, only to have you realize that it’s not much different than the surface.

My playwriting contemporaries, who constantly blow me away with their depth and inventiveness.

I got started in theater when I was 30 and newly divorced. I was a bit of a wreck and was looking for a place to land. I landed in the theater department at UNC Charlotte where I learned the nuts and bolts of being a theater artist. I studied acting, design, and eventually developed a love for playwriting. From there it was on.

What is the most thrilling artistic experience you’ve had lately?

I just got back from participating in 48 Hours in Harlem at National Black Theatre in NYC. It was a harrowing two day experience that included me having to write a new ten minute play for a director and cast (who were all fantastic) in less than 12 hours. Then rehearsing that play and putting it up (off book) for two shows on Sunday night.  In the process, I met an entirely new group of theatrical playmates and took home a ten minute play I love.

There were tears. Lots of Baldwin. And MUCH artistic satisfaction.

Well now it’s the Playwrights’ Center, duh! I’m also pretty happy in the Caribou in my neighborhood. A good table, comfy seating, and coffee are the bare necessities.

What kind of stories have you been interested in writing recently?

I’ve done quite a few adaptations lately. Two by choice, the other was a requirement of 48 Hours in Harlem.There’s something great about finding a story I really connect with, exploding it, then retelling it in unexpected ways. Topically, I still tend to focus my stories on Blackness/Black life/Black identity, but I get to explore it with the fresh set of eyes provided by the pre-existing text.

What will you be working on this year?

QUITE a few things: 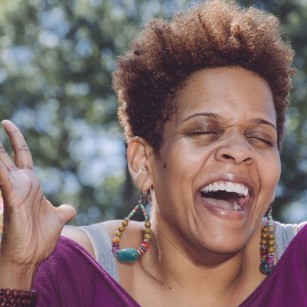