Many Voices Fellow Benjamin Benne is workshopping the night, sans stars at the Playwrights’ Center this week with director Hayley Finn, dramaturg Michael Kinghorn, and actors Hope Cervantes* and Cristina Castro (*Member of Actors’ Equity). Please join us for a free public reading of the play on Wednesday, February 1 at 10:30 a.m. Learn more about Benjamin in this mini-interview:

You’ve written a trilogy of “mortality-themed plays.” What have you discovered about mortality in doing so?

That set of three plays was written following the passing of my father. The first one, Terra Incognita, addressed the question of “How do we commune with the dead?” I used the play to explore different interpretations of the afterlife and how I remained in relationship with the dead. That felt cathartic and essential. I wrote characters in those plays who are ghosts but could speak and interact with the world as if they were still alive. Those plays really cemented my sentiment that people leave their mark on others and the world in lasting ways. No one disappears completely. We all leave eternal footprints in time and space. I don’t fear death the same way that I did as a child. In fact, I think I fear the process of aging more than death itself.

You are a literary manager as well as a playwright. How do the two roles influence each other?

Those roles are two sides of the same coin for me. Slightly different but absolutely related. Playwriting is an opportunity for me to put my personal stories and worldview front and center. Literary management is my opportunity to advocate for sharing others’ stories.

It’s different for every play. However, I would say that the common thread is that, in the beginning, it’s all about finding images, feelings, and an atmosphere that are evocative for me. I incubate those things for a while, then strike with pages while the iron still feels hot. Initially, I try to write everything down; I incorporate every idea, image, and whim. I suppress my censor, as much as possible, and it feels like I’m just vomiting on the page. First drafts are quick, messy, dirty, and should be chock-full of ideas. After that comes the rewriting, which is a longer process of figuring out what the fuck I’ve just written and what is the core story that I want to shape everything else to support. That whittling and structuring process continues in the workshop stage when I’ve got human voices and bodies putting the words into action.

What is something from outside of the theater world that inspires your theatrical writing?

Images are key for me. I collect photographs, sketches, and prints. I have a large cork board that I pin these images to, along with quotes, words, fabrics, etc. Altogether, they form a mood board that influences my writing; I like to think of a play as a collage of all the things that I find inspiring at that particular moment in my life. I’ve noticed that the images on my cork board tend to change when I begin a new writing project.

What do you wish someone would have told you about playwriting that you had to learn the hard way?

I wish someone would have told me earlier that there is no one right way to write a play. While I am grateful that I had realism and “well-made play” structure as a foundation, I wish other forms were taught with equal weight. I also really wish someone had told me that I could write non-human characters, like animals, plants, and elements, in plays!

What is a risk you took that you’re proud of taking?

I’m proud that I submitted my play q u e r e n c i a for my last round of submissions, including to the PWC. I had other pieces that I considered sending, which have received more development, but I decided to send this one because it was so personal. I’m glad I took the risk and that it payed off.

Well, one of the last Many Voices Fellows told me that he rewrote three of his plays and completed three new ones during his Fellowship term so I’m feeling encouraged to aim for the stars, too. I have two commissions that I’m working on, two plays that I want to rewrite, and two ideas that I’d like to turn into first drafts. I’ve also got 40 pages from a bake-off with Paula Vogel that I’d like to see through to a first draft. Then, of course, I’m doing submissions, reading plays, researching theater companies, and maybe I’ll do some non-theater related reading…maybe.

What’s something about you that may surprise people?

This is the first time that playwriting has been my priority. In school, directing was my focus. And while I’ve been pursuing playwriting rigorously in the past few years, my day jobs have eaten up the bulk of my time. I feel very blessed to have this opportunity to, finally, spend the majority of my time doing what I love.

We talk about this a lot with the company that I do literary management for, called Forward Flux Productions. Theater must move toward being more inclusive and reflective of our communities. That means more plays by and roles for women and people of color. So my hope is that we will have achieved parity in all respects by then. I also think that we will be moving away from the large theater house model toward utilizing more intimate and social spaces as theater venues. 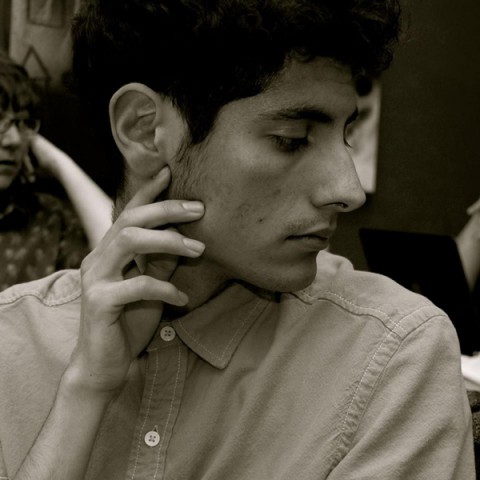