Your Mellon residency at Mixed Blood was renewed for another three years. How does a long­-term residency like this influence your writing?

­It has provided me with a great deal of freedom to explore what I want to work on, what's next for me artistically, while feeling secure in my home base theater and invested in its success beyond my own work as a place where I can support both the community we serve and all the other artists who pass through.

Tell us about your productions this season. ­

This season, I got to see two new plays take steps into the world. I've been working on Imogen Says Nothing with Yale Rep for years, she's a big, heady beast and took a long time to write, and I'm still stunned at my good fortune that I got to see her through to production with the theater that commissioned her and made space for me to have such big thoughts about theater, comedy, feminism, and our literary canon. I also got to see Orange take the stage, first at Mixed Blood Theatre and then at SouthCoast Rep, who commissioned the play. Orange has some really particular tech elements and to get to see two separate production teams create two separate interpretations is such a gift.

You’ve written some epic, girthy plays. What advice do you have to playwrights who want to write bigger?

How does being a writer color your day-­to-­day, outside­-of-­writing life? ­

I space out a lot, my mind wanders. My kids are used to it, they pause mid­-sentence and wait for me to tune back in. And they adventure with me, search the world for stories; that's fun.

­On a bus outside of Arles, France last summer there was a one-­breasted woman laughing her ass off, and a bottle of Heineken being passed up and down the aisle while French rap played on the radio. I haven't successfully written the play yet though, so stay tuned.

A commission for La Jolla Playhouse currently titled Commie Kid and the Reichstag Fire Trial of 1933 and the as yet untitled One-­Breasted Play. And productions of Orange and Imogen Says Nothing.

We'll have miraculously balanced the theater ecology in the intervening years, and theater will be like the story marketplace that everyone flocks to on the weekends to get their fix of stories from the widest swath of humanity possible, to laugh and to cry together, to commune, to dialogue, make dirty jokes, and practice empathy, and as a result the world will be a healthier, happier, less polarized place. 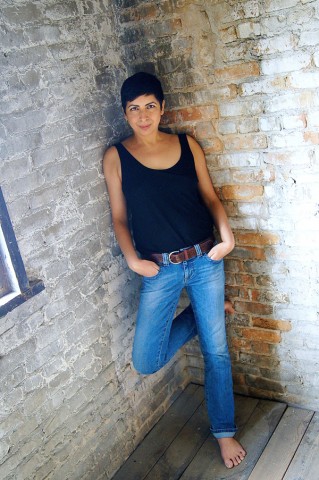