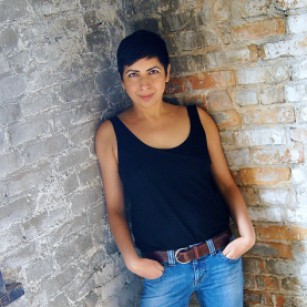 Aditi Brennan Kapil is a television and theatre writer, actress, and director. She is of Bulgarian and Indian descent, and was raised in Sweden prior to moving to Minneapolis, and more recently Los Angeles. Current projects include Season 2 of American Gods on Starz, upcoming Away on Netflix, an as yet Untitled show in development with AMC, two commissions (a translation of Shakespeare’s Measure for Measure, and an American Revolutions commission titled Pax Americana) with Oregon Shakespeare Festival, and an as yet Untitled commission with Audible. Most recently, in the 2016/2017 season, Kapil premiered SouthCoast Repertory (SCR) commissioned play Orange at Mixed Blood Theatre and at SCR, and Yale Rep commissioned play Imogen Says Nothing at Yale Repertory Theatre. She is a Resident Playwright at New Dramatists.

Aditi’s first play Love Person, a four-part love story in Sanskrit, ASL, and English, was developed during a Many Voices residency at the Playwrights' Center, work-shopped at the Lark Play Development Center, and selected for the National New Play Network (NNPN) conference 2006. Love Person was produced in a NNPN Rolling World Premiere at Mixed Blood Theatre (MN), Marin Theater (CA), and Phoenix Theatre (IN), in the 2007/08 season. In 2008/09 it was produced at Live Girls! Theatre in Seattle, Alley Repertory Theatre in Boise, and Victory Gardens Theatre in Chicago. Love Person received the Stavis Playwriting Award in 2009.

Her Displaced Hindu Gods Trilogy (Brahman/i, a one-hijra stand-up comedy show; The Chronicles of Kalki; and Shiv), based loosely on the Hindu trinity of Brahma, Vishnu, and Shiva, premiered in repertory at Mixed Blood Theatre in October 2013, and have since been produced across the US and in the UK. Brahman/iand The Chronicles of Kalki received an unprecedented double nomination for the James Tait Black Prize, University of Edinburgh, UK.

ORANGE by Aditi Kapil will be a part of the Perry-Mansfield 19th Annual New Works Festival in Steamboat Springs, CO. More info.

South Coast Repertory's 2016-17 season will include Orange by Aditi Brennan Kapil. It will run March 5-26 2017. The play is about a teenager from India who joins her rebellious cousin on an adventure.

Aditi Brennan Kapil's play Imogen Says Nothing, developed at the Playwrights' Center, will receive its world premiere at Yale Repertory Theatre in its 2016-2017 season.