The Twin Cities area is well known as a great theater town, so it is a fitting home to one of the nation’s most celebrated new play festivals. The 32nd annual PlayLabs festival runs October 12-18 at the Playwrights’ Center, a 44-year-old organization that is one of just a handful of play development centers in the country.

During PlayLabs, Playwrights’ Center Core Writers Joe Waechter, Kathryn Walat, and Ken Weitzman will spend 30 hours each workshopping a new piece with a team of collaborators: top actors, directors, designers, and dramaturgs from the Twin Cities and around the country. Each play has two public readings, giving the playwrights time to rewrite and experiment.

PlayLabs also features a showcase of work by 2015-16 Playwrights’ Center Jerome and McKnight fellows, a panel discussion about collaboration in theater, and a party celebrating the theater community. All PlayLabs events are free and open to the public.

“Joe, Kathryn, and Ken are crafting brave, complex stories,” says Playwrights’ Center Producing Artistic Director Jeremy B. Cohen. “I’m proud that we can support them by bringing together amazing artistic teams—drawing from the deep pool of local talent, as well as bringing in non-local collaborators like actor Brian Anthony Wilson and directors Adrienne Campbell-Holt and Kip Fagan.”

Plays developed during recent PlayLabs festivals that will seen on stages around the country this season include Christine Evans’ Can’t Complain, Philip Dawkins’ Le Switch, Mat Smart’s Tinker to Evers to Chance, and Sarah Gubbins’ Cocked.

John and Jane were high school sweethearts. Jane and Maryjane are best friends. Emma is back in the town where she grew up, where nothing ever changes—until suddenly nothing will ever be the same. An unexpected love story about the strange passage of time and what happens when you let go of all the old rules.

Halftime With Don by Ken Weitzman

Retired NFL player Don Devers has had over 30 surgeries, experiences violent outbursts, and relies on a blizzard of yellow Post-It notes to offset his ravaged memory. When a longtime fan appears at his doorstep, Don seeks to salvage his life with a single act of heroic self-sacrifice.

The Hidden People by Joe Waechter

Life isn’t easy for the world’s first family and their 47 children. When eldest twins Fred and Frieda run away in search of “a more super awesome life,” all hell breaks loose. In this dark, hysterical, and magical saga, Waechter mashes-up creation myths to forge a new story about family, the origin of the world, and the darkness that lurks within us all.

A party to celebrate the PlayLabs artists and the local theater community.

A discussion with theater artists focusing on the relationship between writers and their collaborators. Panelists: Kip Fagan, Alison Heimstead, and Joe Waechter (collaborating on The Hidden People at PlayLabs); Carlyle Brown and Noël Raymond (co-artistic directors, Carlyle Brown and Company); and e.g. bailey and Shá Cage (frequent collaborators).

All PlayLabs events are free. For tickets, see pwcenter.org/playlabs or contact the Playwrights’ Center at (612) 332-7481 or info@pwcenter.org.

Below: Charlotte Calvert and Ryan Colbert at PlayLabs 2014. Photo by Heidi Bohnenkamp 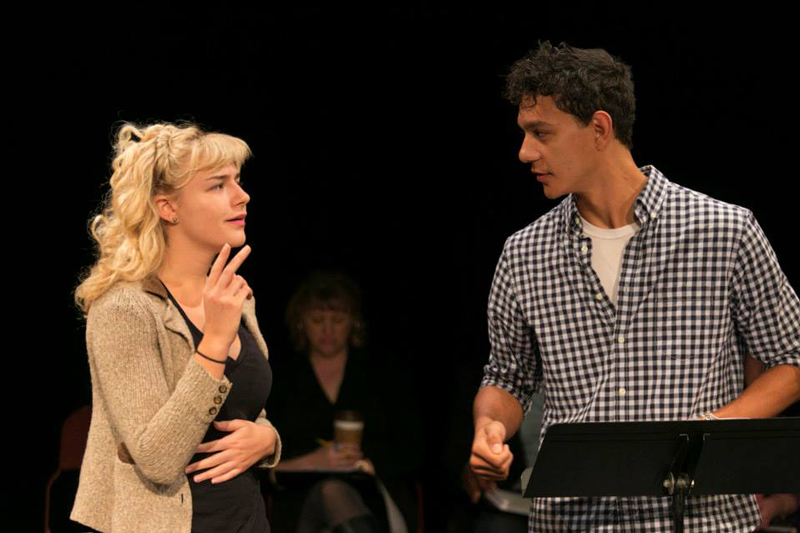