I designed the area premiere of ≈[almost equal to], by Jonas Hassen Khemeri, at Pillsbury House Theatre in the fall. In February, I opened a brand new play by Harrison David Rivers, A Crack In The Sky, at the History Theatre.

You’ve designed for a number of very different projects in the past season. What is the first thing you do when approaching a production?

I meet with my director to discuss where they want to go with the production, and what I think is possible or worthwhile to try. After we’ve agreed on a general direction, I then engage in some intense sonic dramaturgy. If the play is specific to a time and place, what is the appropriate music and environment? Are there sounds or melodies I can create, or does the piece necessitate pre-existing music and/or sounds? (For instance, I am not going to re-create baroque music, and I unfortunately do not have it in the budget to fly to Kenya to record birds.) Conversely, is the play something that can accommodate original music and sounds? Where can I take inspiration to begin?

I am a dramaturgical geek, for better or worse. For the Guthrie Theater’s production of We Are Proud to Present…, by Jackie Sibblies Drury, I voluntarily put together a two-piece dramaturgical packet on the music of Namibia’s Herero tribe and the sounds of the Kalahari Desert and Bushveld. My philosophy is: if you’re gonna do it, do it right. Immerse yourself in the world of the play or don’t do it at all. I did not wind up using recordings of Herero instruments in that play, but it helped to get me in the right frame of mind.

How involved are you in the development and rehearsal process of the productions you work on?

As you can tell from the second question, I’m pretty involved. I always attend the first read-through because I find it’s quite difficult to proceed with a design until I’ve heard the play in the actors’ voices. Once staging begins I attend rehearsals almost daily. I find that being in the room gives me focus and allows me to experiment with the actors and director. It also saves time during tech. I’ve already figured out what does and doesn’t work, so I don’t have to waste everyone’s time while we’re sitting in a dark room for 12 hours; the design’s half done by then. I can be confident in my choices so that I can direct all my energy to programming, levels, and minute futzing.

What does sound design allow you to do that is different from other art forms?

What is a risk you’re proud of taking?

Teaching. It’s easy to know what’s in your head. It’s not so easy to explain that to a roomful of people who want to know for themselves.

Composing is also a risk I’m proud of taking. Creating original music that embodies the emotional tone of a show or a scene can be very intimidating. I won’t say I’ve always succeeded, but at least I’ve started trying.

Is composing a new venture for you?

It’s mostly a new venture. I took piano lessons when I was a child, but I never went further than that. However, I have a very good ear for music and how it does or doesn’t fit the emotional and climactic arc of a show. After many years of using other people’s music to guide the audience through a story, I began to feel dissatisfied with that approach and wished I could create that magic myself. So I started composing. Very simply at first (Walking Shadow Theatre’s The Whale was a good example of my first, basic attempts) and now I continue to stretch my boundaries and skills.

When did you know you wanted to be a sound designer?

Toward the end of my senior year of college. I didn’t get into sound design until then, but once I discovered it I embraced it with a passion. It was a total surprise for me and probably for my parents, too.

Precocious, angst-y, awkward, dramatic, insecure, well-behaved to adults who were not my parents, yet also sassy. And that’s pretty much what I’m still like!

What are some thrilling artistic experiences you’ve had recently?

What is the strangest sound cue you’ve ever created or found?

Well, dragons that aren’t really dragons (for The Children) ranks up there with strange sound cues - or at least unique cues. I also once created a sound effect called “Ethereal Pig Scream” (which is going to be the name of my death metal band). Oh, and there was that time I recorded and edited the sound of my own screams (for Christina Ham’s Glyph). That wasn’t strange so much as it was kind of traumatic. 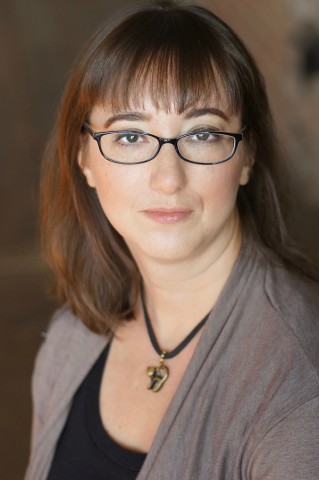