The second play in our 2017-18 Ruth Easton New Play Series is How The Ghost Of You Clings, The Anna May Wong Story by John Olive, with readings January 8 and 9, 2018, at the Playwrights' Center. In this interview, Associate Artistic Director Hayley Finn talks with John about the talented Ms. Wong, how he approached telling her story, and what led him to become a playwright.

How did you hear about Anna May Wong?

The idea for the play is Sun Mee Chomet’s, but I knew about Anna May Wong because I’m a devotee of old films, and I had seen The Shanghai Express. To this day, there are no Asian American actors who have done as much as she did. Silents, talkies, plays, TV, vaudeville. But almost everything she did was what you would call “B movies.” She did a lot of silents that are lost. They didn’t keep silent films around because they’re a fire hazard—silver nitrate or something like that. So a lot of her older films have been destroyed. In addition to The Shanghai Express, Anna is famous for a silent film called The Thief of Bagdad [sic]. She played “the slave girl,” with bare legs, and the lead actor, Douglas Fairbanks, actually had to go to Anna May Wong’s father and ask permission. Anna also played the lead in a silent adaptation of Madame Butterfly (with a Chinese setting), called The Toll Of The Sea. For some bizarre reason, the final scene is lost.

She went to Europe and did a number of pretty high-quality films. Then she came back here to do her only “A” talkie, The Shanghai Express. And that was only an A film because Marlene Dietrich was in it. It’s really good. And Anna May is remarkable. Other than Shanghai, most of the movies she did had “yellowface” actors in them. I made a real effort to find these movies and watch them.

How did you find out about Anna May Wong’s real story?

There are two biographies, both of which I’ve read, and they both emphasize her victimhood. She was in Hollywood in that era when non-white actors could not kiss. This meant there was a whole range of parts that were not available to her. She couldn’t play a romantic lead where she would have to kiss her leading man. So, she had to watch parts that she could have played—should have played—go to other actors. And that frustrated her, to say the least. This culminated with the production of The Good Earth, where they did not cast her in the female lead role, O-Lan. Instead, the role was played by Luise Rainer. They had cast Paul Muni in the lead role, Wang, so they had to cast a white actor as his wife. And it was a shocker for everybody! At that time, Anna May Wong was the most famous Chinese person in the world and not casting her was a scandal.

What was your interest in telling this story?

As I wrote the play, my main thing is to educate people about who this woman was, because most people simply don’t know. Plus, a lot of the challenges that she faced are still faced by Asian actors. They still have these limited roles that they’re asked to play. And it’s no longer about kissing the leading actor. It’s no longer written down the way it was, but it still exists.

When Sun Mee approached you about this idea, how did the collaboration between the two of you develop from there?

There are two basic ways to do biographical stories. One is the “biopic”—I’m going to movie terms—in which you do the factual details of the person’s story. Or, there’s the “Rosebud” approach like Citizen Kane. You end up doing Citizen Kane’s bio by trying to find out what “Rosebud” means. Another example of that is a Beethoven movie called Immortal Beloved. Beethoven dedicated a piece of music to “My immortal beloved.” So they’re trying to discover who that is, and around that you discover all the details of Beethoven’s life.

How much of the play would you say is fiction?

I created the role of a PA (production assistant) on The Barbara Stanwyck Show which Anna did in 1960. I also created the role of a secretive Chinese man following Anna. Many of the roles are based on real people, but I fleshed them out heavily. But all in all, the play is pretty factual. The important thing with stories like this is to decide what to leave out. Anna May Wong lived for 54 years. We have 90 minutes…

There’s also the question of Anna’s possible homosexuality. She “never married,” and that used to be a euphemism for, “she was homosexual.” And then she did this movie with Marlene Dietrich, who was famous for her voracious sexual appetite—men and women—but that’s pretty flimsy evidence. If it even is evidence. But I believe it goes back to this no kissing thing. Why get involved in a swanky Hollywood marriage when it isn’t going to drive your career?

What are you hoping to look at in your workshop at the Playwrights’ Center?

My hope is that people will walk away from this play going, “I now understand that this person was enormous.” By the way, “how the ghost of you clings” is a lyric in a famous song, “These Foolish Things,” written by Eric Maschwitz, and it’s all about Anna May Wong. She had an affair with Eric Maschwitz, who then went home to England to his wife. All he left her was the song. I want to somehow work that into the play.

Tell me a little bit about how you got interested in theater. What was your path to become a writer?

Well, I was an actor. In college, mostly. It just became clear when I started messing around with writing that that’s really what I should be doing. One of the reasons for that is I used to say, “Now I’m an actor in my 20s. I can’t wait to be in my 50s, because then there will be all these roles open to me that are not available now, and there’ll be less competition!” I just had a lot of time on my hands. And it started to work! People were doing my plays. I wrote one play called Minnesota Moon that a lot of people did. And I think that was probably the thing that really kinda inspired me to keep going.

How did you even know you wanted to be an actor? What drew you to the theater as a child?

Well. I always liked the—what’s the word? It’s a combination of exuberance and stage fright that actors experience when they’re getting ready to go and walk onstage. I was always really attracted to that.

Outside of theater, what are some things you like to do?

I’m a voracious reader. My wife and I raised a child; he just turned twenty-one. I mean, I look at my twenty-one year old son, and I’m like, “Wasn’t it just yesterday that we were going over to his foster mother’s house to pick him up?”

Did that affect your writing, having a child?

Yes! He joined us through adoption, and I’ve written several plays about this.

You also write children’s plays. Was this something that happened after having a child?

I don’t think so. I think it was because the artistic director of Seattle Children’s, Linda Hartzell, liked my work and just kept asking me back. Some of the plays have proven really popular, and a lot of people have done them. One of the great things about children’s plays is that the audience turns over every five years. A couple of occasions, with these theaters, I’m like, “You’re doing this play again?”

So what are you working on next?

Well, I have one more play that I’m compelled to write. It is, among other things, about global warming. One of the characters is obsessed with it. I’m pretty well along. And it’s largely about climbing trees. People going up to the top of these big trees—giant firs, giant redwoods—and some of these entities are two or three thousand years old. And they’re like three hundred feet tall. They’re the tallest things on earth. They’re thousands of years old. And they have their own ecosystems up there. Tree canopies are one of the few remaining unexplored regions on the planet. It’s estimated that 50% of the planet’s species live in canopies.

And what’s inspiring you to write this play?

My interest in global warming, largely. One character goes to the top of a tree and discovers a skeleton up there. And it’s wearing a pendant around its neck. So, a lot of the play has to do with researching what that is. Where did it come from? It’s made of gold and seems to be Roman, so this corpse is probably a thousand years old. Where did he or she get it? What’s it doing up here?

Reserve your free ticket for How The Ghost Of You Clings, The Anna May Wong Story » 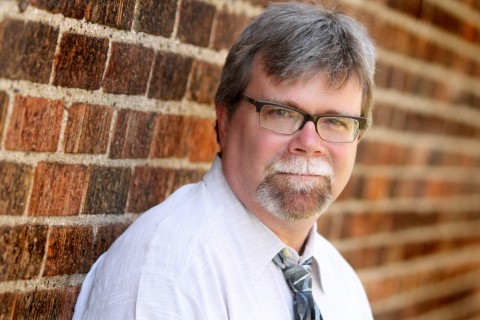