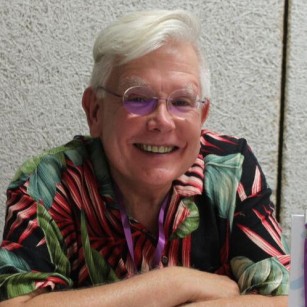 My life as a “trailing spouse” has included stops in Washington DC, Atlanta, Honolulu, and now Tallahassee. My work has won the Source Theatre Company National 10-Minute Play Contest, the Larry Neal Writers Award for Drama, the Virginia Playwriting Prize, and twice been nominated for a Helen Hayes Award. I had pieces in the 2015-2017 Atlanta One-Minute Play Festivals and my romantic comedy, Falling Off the Edge, was produced in Atlanta in January 2018.  My 10-minute play, The New Client, was recently published in Best Ten Minute Plays of 2019 (Smith & Kraus). My full-length play, Memorial Day, was read in Kumu Kahua Theatre’s Dark Nights series in Honolulu and was named a Finalist (one of eight out of 1,243 entries) in the first Moss and Kitty Carlisle Hart New Play Initiative. My 10-minute play, Family Visitation, will be produced in Theatre Odyssey's Ten-Minute Play Festival May 9-12 in the Cook Theatre at the Asolo/FSU Center for Performing Arts in Sarasota, FL.  I am a member of the Dramatist Guild, Klunch, New Play Exchange, Playwrights’ Center, Tallahassee Writers Association, and Working Title Playwrights. I am proud to serve as the Dramatist Guild Ambassador for the Florida Panhandle Region. 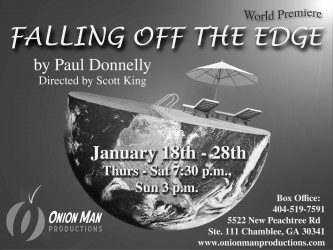 Falling Off the Edge
by Paul Donnelly

A Mormon swimmer who is afraid of the ocean meets two recovering alcoholics taking their first sober vacation at a beach resort in Costa Rica.  One of the women falls for him, while he falls for the other.  No one gets what they want, but at least one gets what she needs.

Cast:
Belinda Morris, mid-30’s, a recovering alcoholic with a veneer of confidence over a fragile core. A once and future realtor. Carly Howe, mid-30’s, Good-hearted, with a deeply ingrained frugality. Also a recovering alcoholic. She would be the first to refer to Belinda as “the pretty one.” Matt Ballard, mid-30’s, a swimmer who is afraid of the ocean. Mormon. If Matt heard most people’s inner monologues as they first meet him, he would think his name was “Oh my god!” He is aware of, but neither embarrassed by nor vain about his looks.

[Shakespeare reference] follows the unexpected couplings and uncouplings, across generations and genders, among the bride's family at a Virginia hunt country wedding.

The play has a cast of seven, four women and three men, ranging in age from early twenties to early sixties. 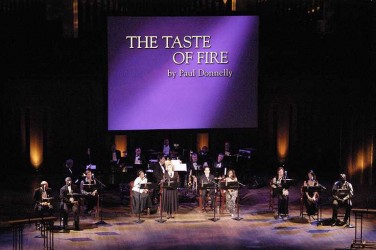 The Taste of Fire
by Paul Donnelly

The Taste of Fire explores the effects of a fatal drunk driving collision on two families, the driver's and his victim's. Roger Cusak, the driver, is an essentially decent man who has made a terrible error in judgment with irrevocable consequences. David Nicholson, his victim, is an abusive lout whose memory is transformed by the cause of his death.

Roger’s wife and daughter must each come to terms with how his action changes her view of him. Susan, his wife, is initially horrified and recoils and withdraws, while Larissa, his daughter, leaps to her father's defense. As the reality of his action and its consequences register, their responses grow more complicated. Larissa becomes more judgmental and rejecting, while Susan finds herself able to make a distinction between who Roger is and what he has done.

Carla Nicholson comes to revel in the role of grieving widow, while her son Ethan finds it progressively more difficult to reconcile the beatification of his father's memory with the lifetime of abuse he experienced. After a bitter confrontation over Carla's attempts to coerce him into participating in her revisions of their family history, Ethan comes to the beginning of an ability to move beyond that history.

Cast:
Margaret Henson-Mittendorf – 40’s. A small town attorney in two-person firm in north Georgia. Margaret is not from Georgia. She settled in this small town because it is Lee-Ann’s hometown.They have been a living together in the town for four years and a couple for much longer. Lee-Ann Henson-Mittendorf – 40’s. Proprietor of a yoga studio, surprisingly successful for a small town in north Georgia. She and Margaret moved back to her hometown four years ago, after the death of her father.
Next Year, Transformers!
by Paul Donnelly

In this ten-minute play, a divorced couple make the peace necessary to salvage a distasterous Halloween for their eight year-old son.

My 10-minute play, Family Visitation, will be produced in Theatre Odyssey's Ten-Minute Play Festival May 9-12 in the Cook Theatre at the Asolo/FSU Center for Performing Arts in Sarasota, FL

My full length play, Memorial Day, was read in Dark Nights at Kumu Kahua in Honolulu in March 2018 and was named a Finalist (one of eight out of 1,243 submissions) in the first Hart New Play Initiative.