Join us for readings of This Happened Once at the Romance Depot off the I-87 in Westchester on November 2 and 3.

Hayley Finn: One aspect of your work that I really appreciate is that it is character-driven. I fall in love with the complexity of your characters, and their unique use of language. How do characters come to you?

Gina Femia: Thank you for that. So, I love writing characters. All of my work is character-driven. It’s aggressively not plot-driven … So it always starts with a voice from the characters for me. Then I just let them talk, and talk, and talk. And usually what they’re talking about is something that I’m interested in either consciously or unconsciously, and then I get to follow that train of thought … I start from the characters and what they’re saying, and then I have to figure out what the play actually is. I feel like the first draft is always the highest—like the light touch of what it is I have questions about or want to say or explore, and then everything else requires a lot more courage.

Hayley Finn: Speaking of courage, this play is very courageous in several ways, in particular in how it talks about female sexuality … What inspired you to write this particular story?

Gina Femia: A lot of what I like to explore comes from a place of rage in that, you know, it’s not spoken about … or the stigmas that we have around sex and sexuality are so high that it keeps us quiet, and it keeps us from being able to say things. And that creates shame around us, and so it really is from a place of rage that all this comes from, where both of them come from, where Kevin’s words and where Beth’s words come from. And it’s cathartic for me to write Beth because she’s saying everything that I want to say and that I want other people to listen to … a lot of what Beth says is just stuff that I desperately want to say, and I hope that people who see themselves in Beth are able to hear that.

Hayley Finn: With this particular play, location is so important. You’ve set the play in a sex shop, and it’s a single set, everything happens right in that space. Why did you make that choice?

Gina Femia: So when I think about character, a place becomes a character in my work. It just happens organically most of the time. I don’t realize it until it’s like, oh, the sex shop also needs to be cast too … I knew that I wanted the play to be in a place that we both consider taboo and also enticing in our society, but to me is just a store that services people in a very specific set of needs, whatever those needs may be like—if it’s for pleasure, fun, or for healing, or all of the above. I wanted to … subvert everybody’s expectations of what would happen in that sex shop. And I have found that a lot of people who read the play, or see the opening stage directions where it’s very clearly in a sex shop—there are dildos everywhere—people will assume that it’s going to be this raunchy, sex comedy … That throws folks for a loop, which I completely understand because the way that we view sex in this country is like it’s a joke, but it’s also the most taboo thing you can do, and it’s also got a specific set of rules for what is “appropriate” sex and what is “not appropriate” sex … So I just wanted to make a store that you’d feel comfortable walking into, and one that is so much part of Kevin’s life that he’s trying to figure out, but also setting up the expectations of the audience to be like, ‘I think that it’s going to be about this …’ And then it’s not really at all.

Hayley Finn: This play in my mind is also about intimacy. There’s so much discussion around intimacy right now in our culture as we’re seeking and pulling away from it. Even though the play isn’t taking place now (it’s clearly set in 2017), I’m wondering if your thoughts around intimacy have evolved in any way?

Gina Femia: If anything, I feel like the conversations I’m interested in that have come out of this time is how unaware people have been about their need for intimacy. And it’s something that I’ve always craved, and always have been interested in. So I’m seeing more, and being a part of conversations more now where people are starting to discover that need and that language around it, and I’m kind of there to be like, ‘Now we can be intimate together?’ … And I discovered that I missed my friends so desperately, as soon as I got vaccinated, I was like, I really want to hang out with my friends one on one … There’s another level of friendship or intimacy there that I think is … something that I’ve looked at as a gift of the pandemic: Being able to be more intimate with my friends.

Hayley Finn: That’s beautiful. Can you talk a little bit about how you came to playwriting and what your journey has been?

Gina Femia: Absolutely. I’m born and raised in Brooklyn, and my parents were as well. And their parents were half born and raised in Brooklyn, and half came from Italy and settled in Brooklyn. So there’s a lot of generations of being from one place here, and they had a very pragmatic mentality about them; you get a job that you can go to work and do a thing, and then come home, and your days are structured. But my dad has always been the dreamer, and he saw that I was always writing as a child. And he saw one day there was a free playwriting class given out through the libraries, and so he signed me up for it … And so the first straight play that I remember seeing, it was Nicholas Wrights’, Vincent in Brixton, which is an imaging of Vincent van Gogh and the years when he was sort of an art peddler. I just remember being swept away by a monologue where the words when they’re spoken can be music, and I latched onto that, and it pulled me through … I went to undergrad for it, and went into grad ... But there aren’t a lot of New York City people that are able to do theater, because there’s so much that you need to do, and a lot of sacrifices. I worked full-time jobs alongside trying to do theater for a decade, but I just kept going because I said, ‘This is the thing that makes sense to me, and makes sense to my soul, so I’m just going to figure it out and keep on writing.’ And that’s what I’ve been doing ever since.

Hayley Finn: Are you working on anything else right at this moment?

Gina Femia: This year has been the year of re-writes because I’ve written over 30 full-length plays ... That’s my favorite part of the process: rewriting more than writing a first draft. I love to discover what the play actually is, versus ‘I’m going to get this first draft out,’ because now I know I can write a first draft in three days. But the journey is the play for me, and so I’m not writing anything new new, but I am re-writing lots of different plays that have already existed, and falling in love with them all over again … And the other thing that the pandemic helped me remember is that I want to do solo work again.

Hayley Finn: I’m curious to know more about it. What was that about?

Gina Femia: That solo show was called I Fucking Hate Shakespeare, and it’s about my journey as a playwright, as an artist finding my voice, but also it’s juxtaposed between using the Bard as the ultimate thing that you can never achieve but also need to achieve. And juxtaposing that with two back-to-back abusive relationships I was in through my schooling essentially, undergrad into grad, so it combines and juxtaposes the two things in order to talk about how I became the artist that I became.

Hayley Finn: What do you want to get out of this workshop at Playwrights’ Center?

Gina Femia: Oh my god, I’m so excited to get to do a workshop at Playwrights’ Center with this play … I feel like entering the space, the play is allowed to be what the play is, so I can actually do the work on it that I want to do. There’s a lot of stuff I feel like it’s close to production-ready, so I don’t anticipate tearing it down to rebuild it ... And I’m excited to get to talk to a sound designer because there’s so much sound, like, it’s really important, there’s a lot of music that’s important to the play ... So I’m really excited that I get to have that part of the process, which I’ve never been integrated in before. 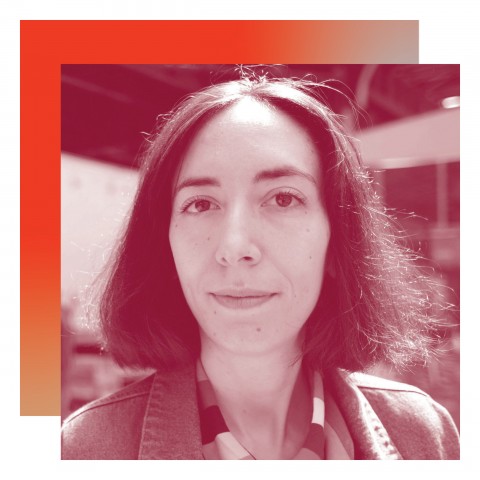