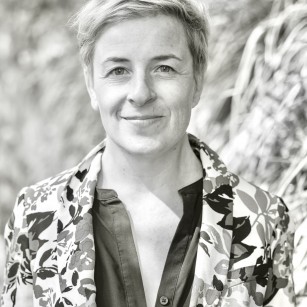 Raised by activist feminist parents and schooled by Quakers, Winter Miller is surprisingly amusing. She makes and champions art to comfort the afflicted and afflict the comfortable. Eartha Kitt once held her left hand for five minutes.

Recent works include the 2022 premiere of When Monica Met Hillary “Intense, discomfiting, revelatory,” The Miami Herald; children’s picture book, Not A Cat, from Tilbury House; and the libretto for the 3-D spatial audio radio opera No One Is Forgotten with composers Paola Prestini and Sxip Shirey, adapted from her play No One Is Forgotten, which Winter produced and directed, “a profoundly devastating play,” The New Yorker.

Her award-winning play In Darfur premiered in a sold-out run at The Public, followed by an SRO performance at Central Park’s 1800-seat Delacorte, a first for a play by a woman. Winter traveled to the Sudan border with NYT columnist Nicholas Kristof. In Darfur has played theaters nationwide. Plays include Spare Rib, a “quasi comic abortion drama,” profiled by The New Yorker; The Penetration Play “cracklingly funny,” NYT; Paternity, Conspicuous, and Animalia Arthropoda. Her plays are published by Concord, Broadway Licensing, and in anthologies.

She has created theater with young people surviving in war-torn areas of Northern Uganda and Palestine, and in LGBTQIA communities in NYC. She received a BA from Smith College, an MFA from Columbia University and is a proud affiliate of New Georges and The Playwrights Center and was elected NYC’s first Dramatists Guild Representative.

Winter has taught in MFA programs with The New School and Queens University of Charlotte and undergraduates at SUNY Purchase. She has lectured at Princeton, NYU, and Pace, and has led writing workshops with The New Group, Primary Stages, New York Theater Workshop and worked with NYC teens with Arts Connection.

A former journalist, Winter wrote 90+ articles for The New York Times, and is profiled in The New Yorker, Bomb, New York Magazine, and on NPR’s Brian Lehrer and All of It with Alison Stewart. She has essays in the anthologies “Pretty Bitches” and “Click: When We Knew We Were Feminists.”