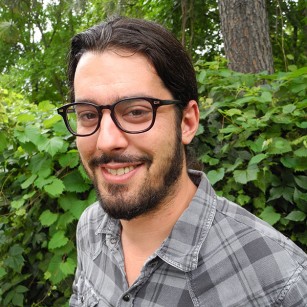 Sharif was born and raised in Walnut Creek, CA; from an early age he was drawn to creative expression.  Growing up without television, he had time for reading, making art, imaginative play, and listening to family stories.

He was introduced to playwriting in classes with Naomi Iizuka at University of California, Santa Barbara and the UCSB Summer Theater Lab. His experiences with Campo Santo, the resident theater company of San Francisco’s Intersection for the Arts, strongly influenced his community-based approach to theater. Sharif’s work at Campo Santo with contemporary playwrights Jessica Hagedorn, Phillip Kan Gotanda, Octavio Solis, and others, afforded him hands-on experiences in many aspects of theater. His fascination with visual art is evident in several of his plays; his interest in poetry has influenced the incisive dialogue and multidimensional characters in his works.

Sharif’s full-length play, Habibi, was produced by Campo Santo. Habibi is an exploration of cultural dispossession and theft over-laid with the tension between an immigrant Palestinian father and his Americanized son. It was named one of the top 10 plays of 2010 by the San Francisco Chronicle. “Family ties knotted in riveting rebellion,” writes Robert Hurwitt. His short play, Canary Yellow, was included in the 2011 Bay Area One-Act Play Festival, which showcased the best short plays produced by independent theatre companies in San Francisco.

Sharif graduated from University of California, Santa Barbara with a BA in studio art. He was the founding artistic director of Muse, an art journal published in Santa Barbara, CA and Fabricate Thought, a unique contemporary art apparel purveyor. Sharif attended the University of California, San Diego MFA Playwriting Program (degree 2013), where he was awarded the UCSD San Diego Fellowship for his commitment to furthering diversity.

During the summer of 2011, Sharif traveled via bicycle and Amtrak cross-country from CA to Waterford, CT to audit the Eugene O’Neill National Playwrights Conference.  Drawing on his previous volunteer work, he offered free workshops on creative expression to disadvantaged youth along the way. In New Mexico, he worked with runaway youth in a Santa Fe shelter. At an Ojibwe language camp in Minnesota, he led the campers through a week-long creative process to develop and perform their own version of a traditional Ojibwe folktale. Their efforts resulted in The Crow Story, which delighted campers and elders of the tribe. The universal truth of the tale also resonated with campers in Harlem who enthusiastically performed the play at Litquake–NY.

Among Sharif’s current projects are Casagemas (working title), an opera about Pablo Picasso’s best friend and their student life in Paris which will premiere at the 2013 Baldwin New Plays Festival; The Mighty Victor, a screenplay of the incredible life of Victor Lustig, the man who sold the Eiffel Tower; Soria Moria (working title), a children’s play introducing an Arab boy into a classic Norse fairy tale; and Claire Benoit, written in 2009–2010, an exploration of the family dynamic and disorientation of Alzheimer’s Disease.