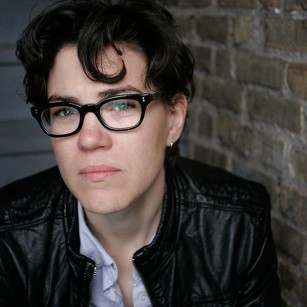 Sarah Gubbins is a Chicago playwright. Her full-length plays include: The Kid Thing, Cocked, The Drinking Problem, I am Bradley Manning, fml: how Carson McCullers saved my life, In Loco Parentis, and Fair Use. She won a Joseph Jefferson Award for Best New Play 2012 for The Kid Thing, which was produced by Chicago Dramatists and About Face Theater and developed by the Steppenwolf Theater. The Kid Thing won an Edgarton Foundation New American Play Prize. fml: how Carson McCullers saved my life was commissioned and produced by the Steppenwolf Theater in 2012 and published by Dramatic Publishing in 2013. The Drinking Problem won the 2012 Global Age Project sponsored by the Aurora Theater in Berkeley California. The Drinking Problem (formerly titled The Water Play) was developed as part of PlayLabs at the Playwrights' Center and received additional development from Timeline Theater in Chicago. Her play Fair Use was developed and produced at the Steppenwolf Theater Company as part of their First Look Repertory of New Plays during the summer of 2008 and was produced by Actor’s Express Theatre in Atlanta. Fair Use was also a finalist in the Alliance Theatre’s Kendeda National Graduate Playwriting Competition. She was commissioned to write I am Bradley Manning by the Theatre School at DePaul University and the play was produced at the Merle Reskin Theater in Chicago in 2012.

Her plays have been read or developed at the Public Theater, New York Theater Workshop, The Goodman Theatre, Steppenwolf Theater Company, Center Theatre Group, American Theater Company, About Face Theatre, Chicago Dramatists, the Playwrights’ Center, The Aurora Theater Company, Timeline Theater, Pine Box Theater, American Theater Company, Next Theatre Company, Actor’s Express, and Collaboraction. Sarah is the recipient of two City of Chicago CAAP Individual Artist Grants and is a Resident Playwright at Chicago Dramatists and an Artistic Associate at About Face Theatre. She was the 2010-2011 Carl J. Djerassi Playwriting Fellow at the University of Wisconsin-Madison and was a 2011-2012 Jerome Fellow at the Playwrights’ Center. She is a member of the CTG Writers’ Workshop and the Playwrights’ Union. She collaborated with the Liz Lerman Dance Exchange on A Matter of Origins. In 2012 Sarah was named, Best Playwright of 2012 by Chicago Magazine. She holds an M.F.A. in Writing for the Screen + Stage from Northwestern University and currently lives in Los Angeles.

Nothing Without a Comapny in Chicago will be performing Sarah Gubbins' THE KID THING in their 2016-2017 season: CHANGE. More info HERE.

About Face Theatre in Chicago received a grant from the NEA to support the commission and development of The Babe Didrikson Project, a musical with book and lyrics by Sarah Gubbins.