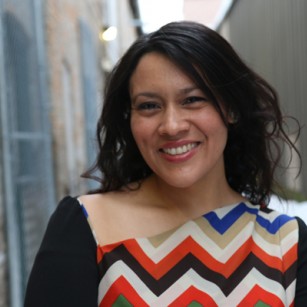 Rhiana Yazzie is a Navajo playwright, producer, director, and actor based in Minnesota. She is a two-time Playwrights’ Center Jerome Fellow (2010/2011 and 2006/2007) and was a Playwrights’ Center Core Member for three years. She was a playwright in residence at the William Inge Center in Independence, Kansas, Fall 2014. She’s been co-commission by the Oregon Shakespeare Festival and the Public Theater for American Revolutions: the United States History Cycle. Notable TYA plays include Chile Pod (La Jolla Playhouse); Wild Horses (Bonderman National Theatre for Youth Symposium and The Kennedy Center’s New Visions/New Voices). She created New Native Theatre in 2009, a company based in the Twin Cities: a new way of looking at, thinking about, and staging Native American stories, newnativetheatre.org. She holds a Masters of Professional Writing from the University of Southern California where she produced lectures and concerts by Madeleine Albright, Herbie Hancock, Spaulding Grey, and Stephen Hawking among others

The Jerome Foundation is proud to announce the 2021 grantees in its Film, Video and Digital Production and Artist Development programs.

Out of 296 applicants, 22 Grantees and 14 finalists were selected by a separate New York City panel and Minnesota panel, and authorized by the Jerome Foundation Board.

Rhiana Yazzie was one of the Minnesota production grantees for the narrative film Wounspe Wankatya: A College Education.

The Dramatists Guild of America is pleased to announce that the co-recipients of the 2021 Lanford Wilson Award are Mariam Bazeed and Rhiana Yazzie. The award will be presented at the Guild’s awards ceremony at a later date. The writers will also each receive a $20,000 cash prize.

Lloyd Suh, chair of the Guild’s Awards committee, commented, “This year’s selection committee had the opportunity to consider so many extraordinary nominees from all over the country, and the amount of talent they found among emerging and early-career playwrights is prodigious. We’re so proud to recognize Mariam Bazeed and Rhiana Yazzie, who in their own very distinctive ways write with palpable personal urgency, rigorous social consciousness, and beautiful theatrical ingenuity. On behalf of the Dramatists Guild Council, we’re so excited to support the continuation of their work in the world.”

Rhiana Yazzie is a 2020 Steinberg award winning playwright, a director, a filmmaker, and Artistic Director of New Native Theatre (Mpls/St. Paul). A citizen of the Navajo Nation, she’s been a Playwrights’ Center fellow multiple times (McKnight 2016/17 and Jerome 2006 & 2010). Her newest play is Nancy, a Native bio-perspective on Nancy Reagan, a sequel to Queen Cleopatre and Princess Pocahontas, a play commissioned by OSF and the Public Theater for the American Revolutions cycle. She has just completed her first feature film, A Winter Love which will premiere at the Wairoa Maori International Film Festival in New Zealand, June 2021.

Rhiana Yazzie is a recipient of the 2020 Steinberg Playwright Awards!  This award recognizes eary-to-mid-career playwrights in an effort to meet the immediate needs of writers.

Rhiana Yazzie has been named a 2018 Bush Fellow. The fellowship supports leaders who are driven to improve their communities in Minnesota, the Dakotas, and the 23 Native nations that share the same geography. Fellows receive up to $100,000 to pursue education and experiences. Learn more here.

Second annual National Native American Ten Minute Play Festival launched in St Paul and Sally Ordway Irvine Award granted to Rhiana Yazzie. The award honors “individuals and institutions that… enrich the state through their commitment to the arts.” The Sallys will be presented on October 16th, 2017.