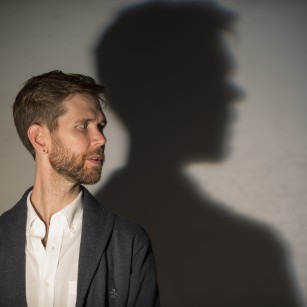 Philip Dawkins is a Chicago playwright and educator whose plays have been performed all over the world. His plays include Failure: A Love Story (Victory Gardens Theater), Le Switch (About Face Theatre, The Jungle), The Homosexuals (About Face Theater), The Burn (Steppenwolf for Young Audiences), Dr. Seuss’s The Sneetches, the Musical with composer David Mallamud and Spamtown, USA (both with Children’s Theater Company, Minneapolis), The Gentleman Caller (Raven Theatre, Chicago; Abingdon Theatre, NY), Charm (Northlight Theatre; MCC), Miss Marx: Or The Involuntary Side Effect of Living (Strawdog Theatre), and his solo play, The Happiest Place on Earth (Sideshow Theatre/Greenhouse Theater Center). Philip has won some awards and not won some others. He’s been a fellow at the Hawthornden Castle International Retreat for Writers in Scotland and the MacDowell Colony in New Hampshire, and has taught playwriting at his alma mater, Loyola University Chicago, Northwestern University, Victory Gardens Theater, and for the Playwrights’ Center in Minneapolis. Many of Philip’s plays, including his scripts for young performers, are available through Dramatists Play Service, Playscripts, Inc. and Dramatic Publishing. He is currently working on an American English translaptation of Michel Tremblay’s Messe Solennelle Pour Une Pleine Lune D'été for Sideshow Theatre and an audio play commission for Audible.com.

Affiated writer Philip Dawkins's play THE GENTLEMAN CALLER received its world premier extended run in Chicago at The Raven Theater in the spring of 2018, running concurrently with its NYC premier at the Abingdon Theater Co.

CHARM, by affilated writer Philip Dawkins, enjoyed an extended run at MCC Theater in New York in fall 2017, under the direction of Will Davis.

The Jeff Award for Solo Performance went to Philip Dawkins for his work in "The Happiest Place on Earth", produced by Greenhouse Theater Center and Sideshow Theatre Company.