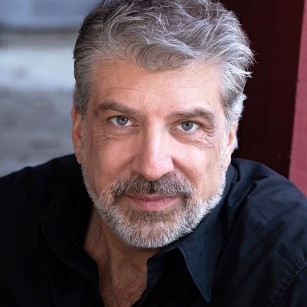 A Resident Artist at Jeff Daniels’ Purple Rose Theatre, Paul’s autobiographical solo show Straight Up with a Twist toured the U.S. for over nine years, culminating in a twice-extended Off-Broadway run.  Stroili’s other playwriting credits include Last Call at the Aardvark, Cheese Louise, Plane Crazy, My Dinner with Arlecchino and A Jukebox for the Algonquin. His screenplay for the film The Beating was utilized by Columbia College in their course of study on short filmmaking. His writing has also appeared in Los Angeles Magazine and New York Magazine. Recently, Paul served as Executive Producer for the feature film, Wake, which was awarded Best Feature Film honors at Riverside, Alexandria and Sedona International Film Festivals.  While residing in Los Angeles, he was a faculty member in the UCLA Entertainment Studies program. He lives in Chicago. PaulStroili.com

A Jukebox for the Algonquin
by Paul Stroili

At a senior living community in the Adirondacks, a small group of residents decide they’re not quite ready to go “gentle into that good night.” This band of displaced former city dwellers from Brooklyn and The Bronx devise a plot to prove that “old” is not a New York state of mind.  A Jukebox for the Algonquin is a tale of those that will not be forgotten, a serious comedy about sex, drugs, and rocking chairs.

When Frankie broke Zack’s nose, Honey thought the worst of it was over.  Turns out it was just beginning.

Honey is hungry.  First generation Irish from the Longwood section of The Bronx– she’s a survivor, but barely.  1935 in New York meant the end of prohibition, which turned all the speakeasies into legitimate businesses, if you want to call The Aardvark Club legitimate. Honey has worn nearly every hat you can wear; slinging drinks, cooking the books, but mostly, she’s a stripper.  It’s a job, actually several jobs - and it keeps her and her young son fed - even if that means dealing with Frankie, the owner of The Aardvark and a mid-level Mafioso with the social skills of a rusty straight razor.

Most of the people who work The Aardvark come and go like ghosts, but it’s hard to miss Zack, an aspiring comic who also performs at the club.  Zack’s not very funny, not yet – but he has some talent.  He might even amount to something.  So why did he have to tell that joke? One fucking joke. About the boss’s girl, no less. And Frankie is not known for his sense of humor.

Now, Frankie’s given Honey yet another job to juggle.  She’s got to help Zack build a whole new act for an audience of one.  Frankie’s got a special event planned and Zack better be funny.  And you know that one, unforgiving rule of comedy; “You either kill onstage, or you just die up there.”

My play, "Last Call at The Aardvark" was recently published by Next Stage Press, and added to their catalogue of September releases.

My play "Last Call at the Aardvark" will receive a staged reading at Edgemar Center for the Arts in Santa Monica, CA.

Paul's autobiographical solo show, Straight Up with a Twist, toured the U.S. for over nine years culminating in a twice-extended Off-Broadway run.

A Jukebox for the Algonquin will receive its World Premiere at Jeff Daniels' Purple Rose Theatre in Chelsea, MI as part of their 30th Anniversary Season in the summer of 2021.