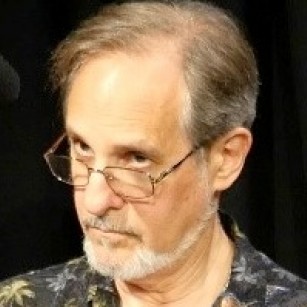 Paul E. Doniger, after six years as the Director of Drama at The Gilbert School in Winsted, CT, became a teacher of theatre and English and is Director of Drama at Pomperaug High School. He was a founding member of the prestigious CSC Repertory Theatre (Classic Stage Company) in New York City, where he trained as a classical actor and director. At CSC, Mr. Doniger served as a leading actor and Board of Directors member in the 1970s. After leaving CSC, Mr. Doniger acted in theatre, film, and television in New York. He moved to Connecticut with his wife Nancy in 1979, where they raised three magnificent children, Colin, Nicholas, and Alexandra. Doniger also served as an adjunct English professor at Western Connecticut State University, from where he holds a Master of Arts in English. He has published numerous articles and is a contributing author for Grammar Alive: A Guide for Teachers (November 2003). He retired from teaching in 2019 and devotes his time to playwriting today. 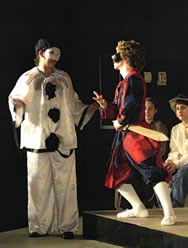 Young Pierette has taken her late father's comic role, Pierrot, but whe has fallen in love with the faithless Flavio, creating problems for the already struggling company of Commedia performers. A mix of comic performances before an on-stage audience and dramatic behind the scenes lives of the players.

Cast:
5M, 6W, 2 either (plus an on-stage audience of flexible sixe)
Cassandra
by Paul E. Doniger

Cassandra, daughter of King Priam of Troy, can see her future, but she can do nothing to change it. She determines to avenge the fate of her people and herself on her husband, Agamemnon. 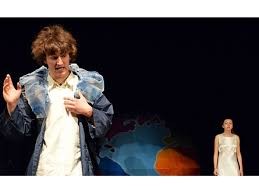 This is a full length political satire based on the three Ubu plays of Alfred Jarry: "In the year 3016, the pompous, self-indulgent, ignorant Ubu has been “elected” President of the Western Hemisphere. His ambitious, nagging wife convinces him, however, that it is not enough, egging him on to try to conquer the rest of the world. With the help of his staff of cronies and a very clever inventor, he begins to plot coups to conquer first Eurasia and then Austrafika. Much to his dismay, however, his Conscience steps in and tries to stop him. Will he succeed in becoming President of the world, or will his conscience win out?"

Young student Charles Dickens (about 15 years old) is suffering writers block and decides to give up his dream of becoming a writer and instead find a safer source of future income. After a school friend and his sister have difficulty helping him, he is visited by the spirit of Shakespeare and three other literary spirits who introduce him to characters from the novels that he might one day write. These characters beg him not to quit but to give them a chance to exist. Will they succeed in their quest for survival and  keep Charles from giving up his dreams? 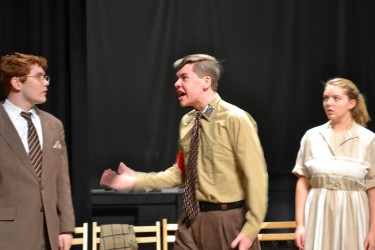 Passive Resistance - A Living Newspaper in one act (ca. 35-40 minutes)

Written in the form of a living newspaper, this one-act play combines a documented history of the resistance of the German swing youths (swingjugend) during the 1930s and 40s with a fictionalized dramatization of the resistance movement of these young people. Historical events are related by four speakers, through news media, letters, speeches, and other documents, and are interspersed with scenes (chronologically arranged) of the story of a small group of friends who resist the rise of National Socialism by listening to American jazz and swing music.

Cast:
SPEAKER 1 - The four speakers act as narrators in the play (1) SPEAKER 2 SPEAKER 3 SPEAKER 4 WERNER GUNDERT - A teenager in Hamburg, Germany ERIKA - His girlfriend FRAU GUNDERT - Werner's mother GERTRUD GUNDERT - His young sister GESTAPO AGENT GUDRUN - One of his friends HANS GUNDERT - His younger brother OTMAR - One of Werner's friends ROLF - One of Werner's friends DOROTHEA - A female prison guard (1) Note about the four speakers: The 1st and 3rd Speaker are intended to be male and the 2nd and 4th speakers are intended to be female. It might be possible to alter these gender expectations, but it is preferred that gender bending be avoided.
Echo/Memory
by Paul E. Doniger

The arrogant, self-absorbed Fritz Kuhn, former leader of the German-American Bund during the 1930s, and now in prison, for denazification, in Munich, Germany, 1949, is haunted by his memories and his failures as he relives the events of his life and debates with the echo in his head.

Scenes from Kuhn's memories could be enhanced through the use of projected images and film clips.