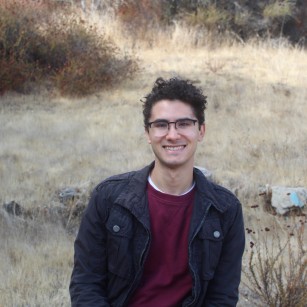 His writing has garnered numerous awards, including First Place in Flash Fiction in the 2021 Bridport Prize and Finalist placements in American Blues Theatre’s Blue Ink Award, the Yale Young Storytellers Competition, and B Street Theater’s New Comedies Festival. His novel was selected as the winner of the Black Creatives Fund Revisions Workshop, a collaboration between We Need Diverse Books and Penguin Random House.

Crocodile Day, an Indigenous retelling of Peter Pan, was published by Playscripts, Inc. His four-part series A Queer History of American Food, which explores LGBTQ+ history through iconic American dishes, was produced by Center Theatre Group's Digital Stage in 2021 and is available on their Community Stories website.

He was a 2021-22 Many Voices Fellow at the Playwrights’ Center and the inaugural Generation Now Fellow with Children’s Theatre Company and the Generation Now partnership of theatres.

When he isn't writing, he enjoys supporting local drag artists, exploring nature, and baking with his husband.

In this reimagining of Peter Pan from the perspective of Neverland’s Indigenous tribe, twins Tho and Satesan are tasked with summoning Crocodile to their people’s most treasured celebration: Crocodile Day! But on an island filled with pesky fairies, greedy pirates, deadly mermaids, and that annoying flying boy, success seems near-impossible. Through this heartfelt and hilarious journey, they find the strength to overcome their doubts and a way to tell their own story.

Crocodile Day is available to license from Playscripts, Inc.

The Big Four were a quartet of Black women who worked as conductors on the Underground Railroad through Quinn Chapel in Chicago. History remembers their stories in fragments. Now, in order to enter the Gates of Heaven, they must forget their lives and work on Earth. This powerful and spiritual journey utilizes movement, song, history, and spectacle to re-member these four women.

Aislin and her husband Cesar are excited to settle into their new home in Proctor, Massachusetts. Even their nosy white neighbors seem nice enough. But as Aislin becomes aware of strange occurrences surrounding her job at the Natural History Museum, she starts to wonder if there might be something insidious beneath the sleepy town. After Shannon— her only Native coworker— mysteriously disappears, she realizes the nightmares she’s been having may be more than just dreams. Will she discover the town’s secrets, or will her insecurities keep her from pursuing the truth?

Calamus is a journey through queer America past and present inspired by Walt Whitman’s collection of poems of the same name. After a young teen is kicked out of his home for being gay, he along with a transgender slam poet named Ford travel across America and through history attempting to find hope and acceptance. This show touches upon issues of LGBTQ identity, youth homelessness, intersectionality, queer erasure, love, heartbreak, and friendship.

BAD MEDICINE had a staged reading at Primary Stages.

CROCODILE DAY, my Native reimagining of Peter Pan, was published by Playscripts and is now available to purchase and license.

P.C. Verrone's play BAD MEDICINE will be featured in Native Voices at the Autry’s 28th Festival of New Plays with readings at the Autry and La Jolla Playhouse.

We Need Diverse Books (WNDB) is excited to announce the two winners of the inaugural Revisions Workshop: Trae Hawkins (Middle Grade and Young Adult Category) and P.C. Verrone (Adult Category). Both winners’ manuscripts will be considered for publication at Penguin Random House.

The Revisions Workshop is one of three initiatives within WNDB’s Black Creatives Fund, which launched in early 2021 to support Black writers and illustrators. Penguin Random House was the inaugural sponsor of the fund in the 2021 calendar year.

Short story 'What to Watch' was awarded First Place in Flash Fiction by the Bridport Prize Competition.