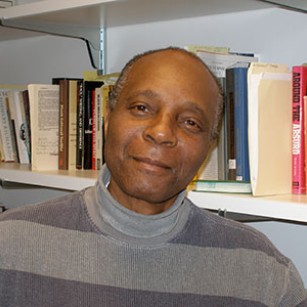 OyamO (a.k.a. Charles F. Gordon) is a Professor of Theater and writer-in-residence at the University of Michigan in Ann Arbor. His plays have been performed in theaters across the country, including the Yale Repertory Theatre; the Manhattan Theatre Club, the Working Theater, the Public Theater, Negro Ensemble Company, Frank Silvera Writers Workshop, New Federal Theatre, Frederick Douglass Creative Arts Center, BACA, Ensemble Studio Theatre, and the Triplex Theatre, all in New York City; Penumbra Theatre of St. Paul, Minnesota; Karamu House Theater in Cleveland, Ohio; Shelby Community Players at Shelby State Community College in Memphis, Tennessee; Crossroads Theatre and the George Street Playhouse of New Brunswick, N.J.; the Arena Stage Theatre (three Helen Hayes Award nominations) and the Kennedy Center in D.C.; the Wexner Center of Columbus; Theatre of the First Amendment at George Mason Univ. in Fairfax, VA; Lorraine Hansberry Theatre and Eureka Theatres in San Francisco; the Goodman Theatre of Chicago; the O'Neill National Playwrights Conference in 1972, '73, '74 and '98; Theatre Emory in Atlanta; National Theatre Institute in Montreal; Theatre du Horla in Avignon, France; the Meadowbrook Theatre in Rochester, Michigan; the Fountain Theatre in L.A.; the St. Louis Black Repertory Co.; and at numerous American universities. He is a past member of the NEA Professional Nonprofit Theatre Panel and a current NEA Site Monitor. He was a 1998 panelist for the Evelyn and Walter Haas, Jr. Fund of San Francisco. He has received fellowships from the Berrilla Kerr, Guggenheim, Rockefeller, and McKnight Foundations, as well as grants from the Ohio and N.Y. State Arts Councils and three NEA fellowships. He received his M.F.A. in playwriting from the Yale School of Drama and is a member of PEN, Dramatists Guild, New Dramatists (alumni), the Ensemble Studio Theatre, Writers Guild East, the O'Neill Playwrights Center, and the Black Theatre Network. For HBO, he wrote an episode for the Famous Black American Anthology and a tv adaptation of I Am A Man.  Famous Orpheus opened May 30, 1998, at the Geva Theatre in Rochester, N.Y. and was extended two weeks; Garth Fagan did choreography; the last three weeks of the show sold standing room only. Boundless Grace opened Jan. 16, 1998, at the Minneapolis Children's Theatre Company. Let Me Live opened April 27, 1998, at the Goodman Theatre in Chicago, where it was chosen as one of the top ten productions of 1998 by the Chicago Tribune. The Ressurection of Lady Lester opened at the Kuntu Repertory Company of Pittsburgh in the spring of 1998 and was published by Sun and Moon Press in 1999. It was produced in Montreal at the Theatre de la Ligue National d'Improvisation in November, 2000.  In Living Colors, a dance performance piece, opened in January, 1999 at Detroit's Plowshares Theatre Company. OyamO has been commissioned by the Seattle Children's Theatre to do an adaptation of The Sorcerer's Apprentice for the Christmas holidays. He won the 1999 Eric Kocher Playwrights Award for his The White Black Man (Mundele Ndombe) at the Eugene O'Neill Theater Center's National Playwrights Conference of 1998. The play was chosen to be presented in the New Work Festival at the Mark Taper Forum in L.A.in November, 1999 and was produced by the Plowshares Theatre in Detroit in May, 2003. He wrote and produced Liyanja, a Congolese dance drama, in November, 1998 at U of M's Trueblood Theatre. He was awarded a PEW/TCG Playwright-in-Residence Fellowship for the year 2000 at the Philadelphia Theatre Co. Mundele was workshopped in January, 2001 at the Mark Taper Forum. His Harry and the Streetbeat was workshopped at the Philadelphia Theatre Company in February, 2001 and at the New Harmony Theatre Project in New Harmony, Indiana, May, 2002. He was a site monitor for the NEA and is a former vice president of the Board of Directors of The Theatre Communications Group. He wrote a musical based on the history of Detroit, the research funds for which were provided by OVPR through its Arts For Citizenship program at the University of Michigan. For the Madison Repertory Company he wrote Wisbom, a play about a 1970 bombing on the University of Wisconsin - Madison campus. His Selfish Sacrifice, a play based on Ibsen’s A Doll's House and commissioned by the Denver Center Theatre Company, ran at the Denver Center for the Performing Arts until February 26, 2006. Killa Dilla was produced in a showcase production by the Working Theatre of NYC at the Players Theatre in Greenwich Village, January 5 to January 12, 2006.  His commissioned musical adaptation of The Sorcerer’s Apprentice opened at the Seattle Children’s Theatre in November, 2006 and ran until early January, 2007. His musical, Club Paradise, based loosely on Milton’s Paradise Lost, opened in January, 2007 at  Manhattanville College. The Mosaic Youth Theatre of Detroit commissioned him to write two plays, one on the Civil Rights Movement in Detroit, City In A Strait, produced May, 2007, and the other on the Fisk Jubilee Singers, Sing Jubilee, scheduled for a May, 2008 production at the Detroit Institute for the Arts.