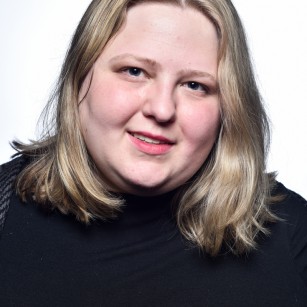 Lauren Wimmer writes about loneliness, fear, and death in ways that make people say, "hahaha." She is the author of several plays including Divorce Party, which has been produced by Cave Theatre Co. following development at Sewanee Writers' Conference and Theater For The New City. Her play, The Originals, was a semi-finalist for Road Theatre's Summer Playwrights Festival and has been developed at Swarm Artist Residency and Campfire Theatre Festival. The Death of Hayden Waverly, The Most Popular Person In The World was the Region II nominee for KCACTF’s National Partners of the American Theatre Playwriting Award and a semi-finalist for the Association for Theatre in Higher Education's Judith Royer Award for Excellence in Playwriting. The play was performed at Ars Nova’s ANT Fest in 2018. Lauren’s play, untitled STRONG WOMAN play, was presented in a staged reading at Dixon Place and was developed at Workshop Theater. Theatre Evolve presented her play, Bettering An Already Better You, in their New Works Festival. Her collaboration with The Bellwether Project, Dr. Rees Ziti’s Pageant for a Better Future, premiered at Ars Nova’s ANT Fest in June 2019. The Annoyance produced her one-act play, Do As I Say. In addition, Lauren was a finalist for the Ingram New Works Lab at Nashville Repertory Theatre. Her short play, Everything You'll Miss In Minutes, was selected for Theater Masters' National MFA Playwrights Festival and was published by Samuel French. Mildred’s Umbrella Theater Company produced her short play, The Citalopram and The Sertralines. She is a former playwriting apprentice at New York Stage and Film's Powerhouse Theatre, Playwrights’ Center Core Apprentice, and Sitka Fellow. She is graduate of The Second City's Conservatory & Writing Programs and participated in The Flea’s Pataphysics Workshop. Lauren earned her B.A. in Theatre from Sarah Lawrence College and her M.F.A. in Dramatic Writing from Carnegie Mellon University where she was the recipient of the Jean & Samuel Elgart ACS Legacy Fellowship and the Mary Marlin Fisher Playwriting Award.