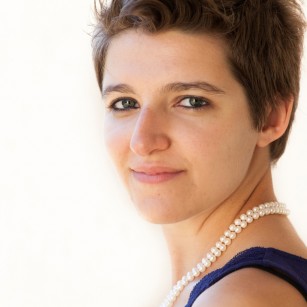 Kristin Idaszak (she/they) is a Chicago-based playwright, dramaturg, deviser, and producer whose recent work examines climate justice, queerness, and disability. She is a two-time Playwrights' Center Jerome Fellow. Her play SECOND SKIN received the Kennedy Center's Paula Vogel Award and Jean Kennedy Smith Award, and her play ANOTHER JUNGLE was a Relentless Award Honorable Mention. She was the Shank Playwriting Fellow at the Goodman Theatre and a member of the Goodman Playwrights Unit. She has received commissions from EST/The Sloan Foundation, Cleveland Play House, St. Louis Shakespeare Festival, TimeLine Theatre, and The New Colony. She was the Kennedy Center Fellow at Sundance Theatre Lab. Idaszak is a Resident Playwright at Chicago Dramatists.

Nationally, Idaszak's work has been seen at or developed through the Goodman Theatre, the Playwrights' Center, La Jolla Playhouse's WoW Festival, The Drama League, Ensemble Studio Theatre, SPACE at Ryder Farm, Pasadena Playhouse, the Williamstown Theatre Festival Directing Studio, Circle X, Renaissance Theaterworks, Palm Beach Dramaworks, Perishable Theatre, and others. With choreographer Erin Tracy, she has co-created Better Metaphors, which premiered at the Blurred Borders international dance theatre festival in San Diego, and Commence, for the Patricia Rincon Dance Collective. She received a residency at the Qualcomm Institute IDEAS series. Kristin has been a finalist for the Princess Grace Fellowship and at Hedgebrook, New Harmony, and the Bay Area Playwrights Festival.

In Chicago, Idaszak's plays have been produced or developed by Rivendell Theatre Ensemble, The New Colony, Shattered Globe, WildClaw Theatre, and 20% Theatre Company. The City of Chicago's Department of Cultural Affairs and Special Events awarded her an Incubator grant and an Individual Artist Program grant. She also received Stage Left Theatre's Downstage Left Residency. She was nominated for a Jeff award for Best New Work for co-writing Theatre Seven's WE LIVE HERE.

As a theatre teacher and mentor, Idaszak has served as an adjunct instructor at Northwestern University, The Theatre School at DePaul University, and Westmont College. She has been a Visiting Guest Artist at the University of Southern Maine, Southern Illinois University, University of St. Thomas, Augsburg College, Coe College, and Michigan State University. She has also taught master classes and seminars at the Playwrights' Center, KCACTF, and Chicago Dramatists. Additionally, she has mentored youth artists through the Pillsbury House + Theatre Chicago Avenue Project as well as the American Theatre Company's docudrama project the Chicago Chronicle.

Idaszak is the co-founder of Cloudgate Theatre, a company dedicated to telling fiercely theatrical stories through a queer feminist lens. Cloudgate premiered her play ANOTHER JUNGLE in Aprli 2018 in co-production with The Syndicate and STRANGE HEART BEATING in July 2019. Previously, she served as the Associate Artistic Director and Literary Manager for Caffeine Theatre and the Associate Artistic Director of Collaboraction. She has worked in the literary departments at the Goodman Theatre, La Jolla Playhouse, Trinity Rep, and Williamstown Theatre Festival. Idaszak is a member of the Chicago Dramatists Board of Directors. She was awarded her MFA in Playwriting at the University of California, San Diego. She received her BFA in Theatre Arts from The Theatre School at DePaul University, where she graduated Summa Cum Laude with a double major in philosophy.

Kristin Idaszak is now in residency with Timeline Theatre's Playwrights Collective through January 2022.

Kristin Idaszak's The Surest Poison (workshopped at PWC) is a finalist of the 2019 Blue Ink Playwriting Award, presented by the American Blues Theater: https://bit.ly/2UjkDrX

The world premiere of Kristin's play SECOND SKIN is currently running as the final production of WildClaw Theatre's 10th season. Performances are at the Den Theatre in Chicago through October 13: http://www.wildclawtheatre.com/project/second-skin/

Kristin has been named a Resident Playwright at Chicago Dramatists and will receive six years of development support. http://www.chicagodramatists.org/NewResidentPlaywrights-2017

Kristin Idaszak is one of five Chicago-based playwrights newly named to the Playwrights Unit, a year-long residency in partnership with Chicago Dramatists. Click here for more information.