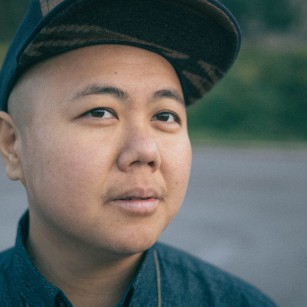 Kit Yan is a NYC based transgender writer, born in Enping, China, and raised in the Kingdom of Hawaii. They are the 2021 reipient of the Kleban Prize for most promising book of a musical, and a recipient of the vivace Award for big ideas in theater. Kit has been a fellow at the Dramatists Guild Foundation, Lincoln Center, MacDowell, the Playwrights' Center, and the Musical Theater Factory.

Their work has been produced by the Smithsonian, American Repertory Theater, Musical theater Factory, the New York Musical Festival, Weston Playhouse, NY Rep, Keen Company, and Diversionary Theater. They are currently in development at Playwrights Horizons, 5th Avenue Theater, the Village Theater, the Oregon Shakespeare Festival, and San Diego Rep. Their award-winning musical, Interstate, opened to rave reviews at Mixed Blood Theater in Minneapolis and is in development with New York Stage and Film, East West Players, and MCC Theater. Kit's first play Queer Heartache won 5 awards at the Chicago and SF Fringe Festivals, and their second musical, MISS STEP, received grants from NAMT and ASCAP to continue development at Playwrights Horizons and their play Mr. Transman has received support from Sundance to continue development.

Artistic statement: My work is a dreamspace where I witness, remember, & reflect on my queer and trans herstories. For me, writing is a spaceship into the borderless ancestral past, the puzzle pieces of a manifested queerturevurse, and a lifeline back to earth. An earth that is a sacred ground filled with stories—messy, ugly, and wholly beautiful. My dreams lead me to write about fractures—times I fucked up, times I was held accountable by family and community, and times of collective liberation. I believe that queer love can smash racism, patriarchy, and the systems that hold us down. I believe in queer love. I believe in queer people.

The American Theatre Wing has named the recipients of the 2021 Jonathan Larson Grant, awarded annually to early-career musical theatre composers, lyricists, and librettists, or writing teams. Each grant carries with it an unrestricted $10,000 prize as well as additional support in the form of residencies, concerts and recording grants. The 2021 grant winners include Kit Mee Kuen Yan, awarded for lyrics and book. Read more here.

“NYSAF is excited to gather artists in the Hudson Valley—and we eagerly await that first rehearsal when we come together to build stories that are the bridges for connecting communities,” said NYSAF Artistic Director Chris Burney. “We are grateful to our institutional partners—Vassar College, Revel 32°, and Marist College—for working with us to make the summer possible and to help bring live theatre back to audiences. After a year of working with artists online, we cannot wait to be back in person and in process together.”

Marist College will host a presentation of Interstate (July 25) by Li and Yan, directed by Jesca Prudencio. The show follows a transgender slam poet named Dash who goes on a cross-country tour with his best friend Adrian, a lesbian singer-songwriter.

Off-Broadway’s Keen Company has announced programming for its 2020–2021 digital season, including a new work by Kit Yan.

Playwrights Horizon has comissioned Kit Yan for Season 2 of Soundstage.