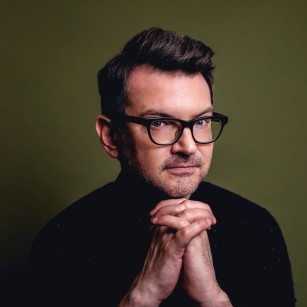 Ken Urban is an award-winning playwright whose work for the stage and screen engages the pressing political issues of our time, while avoiding simple didacticism and the false comfort of cynicism. His plays tackle a wide variety of subjects ranging from the rise of anti-gay violence in Uganda to the tragedy of gay divorce in Boston. Yes, all his writing shares a deep sense of radical empathy and intellectual rigor.

Ken's plays include A Guide for the Homesick, The Remains, Sense of an Ending, The Correspondent, A Future Perfect, The Awake, and The Happy Sad. His plays have been produced Off-Broad way at Rattlestick Playwrights THeater, 59E59 Theatre, the Amoralists, and the Summer Play Festival at the Public Theater. In London, his work has been seen at the Huntington Theatre Company, Studio Theatre, SpeakEasy Stage Company, First Floor Theater, and the Mill at Stage Left.

For the screen, Ken wrote the screenplay for director Rodney Evans's feature-film adaptaion of his play The Happy Sad. The film screened internationally at over 25 film festivals, and is now available on iTunes, Hulu, and Amazon. His TV pilot The Art of Listening was optioned by ITV Studios and David Oyelowo's production company, Yoruba Saxon.

His plays are published by Dramatists Play Service, and they have been featured in numerous monologue anthologies.

He leads the band Occurrence with vocalists Cat Hollyer and Johnny Hager. Their latest releases are Everyone Knows The Disaster Is Coming and If He Were Here, both released in 2018, available on all major streaming platforms and Bandcamp. The band are currently writing and recording new material at their studio in Washington Heights, working with Tony-nominated composer Daniel Kluger.

Ken is the Senior Lecturer and Head of Dramatic Writing in the Music and Theater Arts program at MIT. (Yes, MIT has a theater program.) He has also taught writing at Harvard University, Princeton University, Tufts University, Davidson College, and Rutgers University.

He lives in New York City with his partner, Johnny.

Urban, 43, will soon be wearing that look himself: The world premiere of his play “A Guide for the Homesick’’ is scheduled for Oct. 6-Nov. 5 at the Huntington Theatre Company. But Urban has another reason to be in the Boston area: He’s been named senior lecturer in theater arts at the M.I.T.

The Remains by Ken Urban will be included in Studio Theatre's 2017-2018 season.

Ken Urban's play A Guide for the Homesick will be included in Huntington Theatre Company's 2017-2018 season.

Off-Broadway theatre group The Amoralists has announced its 2016-17 season, which will include the world premiere of Ken Urban’s dark comedy Nibbler, to be staged at Rattlestick Playwrights Theatre in 2017.