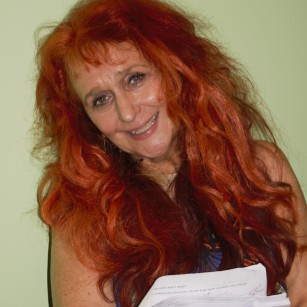 Kay Adshead is a poet, playwright, theatre maker and producer.

She trained at RADA as an actress, where she won the Emile Littler Award for Outstanding Talent. She has played leading roles in film, theatre and TV, including Cathy in the BBC classic series Wuthering Heights, Viola in Twelfth Night and Betty in Touched at The Old Vic, and Linda in Mike Leigh’s film Kiss of Death.

As a writer, she has been nominated 3 times for The Susan Smith Blackburn Award. She has written over 25 plays published by Methuen, Faber and Faber, and Oberon, with commissions and productions at The Royal National Theatre, The Royal Court, The Young Vic, The Bush, Soho Theatre, The Cock pit, The Arcola, Theatre503, The Omnibus and many more.

She has devised and directed more than 10, live art projects( many with casts of over 30 ) working in hard to reach communities, including maximum security prisons. 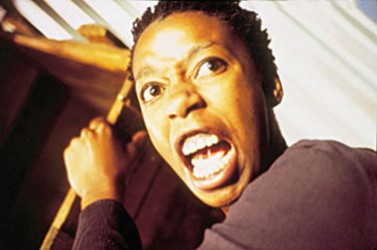 Kay Adshead has written over 25 plays. Pictured is Noma Dumezweni as The Bogus Woman at The Bush..see http://www.unitedagents.co.uk/kay-adshead for a full list of all her work.

Comissioned work includes Lady Chill, Lady Wad,Lady Lurve Lady God, for The Royal National Theatre, Bacillus for The Royal Court, The Bogus Woman for The Edinburgh Traverse and The Bush, Bones for Haymarket Leicester and The Bush, Bites For The Bush, Animal for the Soho Theatre, After The Party for The Young Vic and many more.

Press on Bones  By Kay Adshead

Bones’ insight into a destructive and hidden world makes it stand out against anything else you will see this year” – Shows You Mustn’t Miss, BBC Online

“The overall strength and range of the performances are so vast that the theatre trembles with emotion. BBC reviews.

"We are in a devouring world, with scenes set in Afghanistan, Guantanamo Bay and Texas ... greed, power and a kind of bogus divinity are lethally connected.” – John Peter, Sunday Times, 23 January 2005

“Animal stands comparison with the finest of 20th-century plays Adshead makes you want to take to the streets while you still can.”Financial Times (Four Star Rating)

Press for The Bogus Woman

"Powerful passionate committed piece of theatre that if seen widely enough may change hearts and minds". – The Guardian

"This is political theatre at its best". – Scotland on Sunday