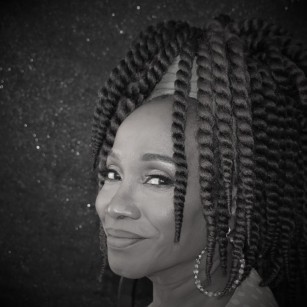 Jovelyn D. Richards is an African-American/Native American writer/director/teacher and performance artist living in Oakland, CA. She has done solo performances at The Marsh, Afro Solo, and La Peña in the San Francisco Bay Area, as well as at the Los Angeles Women's Theater Festival, the National Black Theatre Festival in North Carolina, and other venues. She has also published short stories and a novel, and she is the host of a radio show on KPFA that explores the racial and other diverisions in our society.

Her work often focuses on the dignity, wisdom, and resilience of people of color as they struggle with systemic racism. Her novel, Tulips for Evening, deals with race relations in the South immediately after the Civil War. Her solo performance piece, Come Home, dealt with Negro soldiers from rural Arkansas returning home after World War II, and Miz Pat's House presents stories about diverse women in a mid-20th century brothel run by an African-American woman.

Her current play, "9-1-1: What's Your Emergency?" explores the racist fears that drive white women to call the police when they see people of color in their neighborhoods. "9-1-1" is being created in collaboration with Showing Up for Racial Justice, a national organization dedicated to fighting white supremacy.

Richards has worked for over 25 years in marginalized communities as a family advocate and community educator, and she is especially interested in the intersectionality of race, class, gender, and LGBTQ oppressions. She is a consultant with Peer Advocates Training and Consulting and has been leading cultural diversity training workshops with the teachers and staff of the Stockton Unified School District.

Richards has also directed theatre residencies at the San Francisco Sex Workers Theater and Film Festival, at Bennett Colleege, and Central Eastern University in Budapest, Hungary. She is currently an artist-in-residence at La Peña Cultural Center in Oakland, CA.