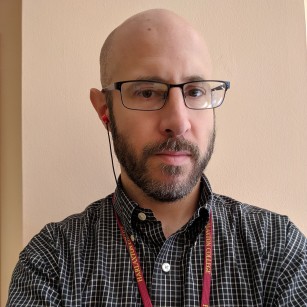 He began writing screenplays as an undergraduate, with his first produced script, Reality, going in front of the camera in 2010. He followed that film with a 10-episode web series, The Book of Dallas, which earned nearly 2 million views through a distribution deal with KoldCast TV. In the ensuing years, he has written feature film projects for Cinephreak Pictures, Rossetti Productions, and TPT Productions, while also writing and directing the short films The Last Day and Post Trauma for his own production company, Court Street Productions.

Atkinson also is an award-winning documentary filmmaker; his first documentary feature, From the Ashes: The University of Evansville Purple Aces, was named Best Feature at the 2018 Mayday Film Festival, and was nominated for Best Historical Documentary by the Ohio Valley Chapter of the National Academy of Television Arts & Sciences. He also has directed has co-produced the WNIN Tri-State Public Media documentary series Evansville at War, and has independently produced and directed the five-episode documentary series Epidemic: Addiction in Middle America, which was nominated for an Ohio Valley Emmy Award for Best Social Documentary.

After successful stints directing Jennifer Haley’s The Nether and Annie Baker’s Circle Mirror Transformation at Evansville Civic Theatre, Atkinson wrote his first full-length stage play, Hope, in 2021. He also serves as assistant professor of communication at the University of Evansville in Evansville, Indiana, where he lives with his wife and two children.

Eric, Delia, and Owen are high school friends living together as college housemates when society begins a rapid breakdown. First, the power goes; next the water. The supply chain breaks down, leaving grocery stores and gas stations empty husks - monuments to a society that took centuries to build, and only days to crumble.

Hundreds of miles from the homes where they grew up, the trio - with an assist from Mark, Delia’s gun-loving, survivalist one-night stand who won’t leave - must figure out how to navigate a terrifying new reality where nearly all of their skills and knowledge have been rendered meaningless. Across four acts, the group faces off against their surroundings, their neighbors, and - ultimately - each other, as they realize that surviving today could mean abandoning everything they knew, loved, and believed in.