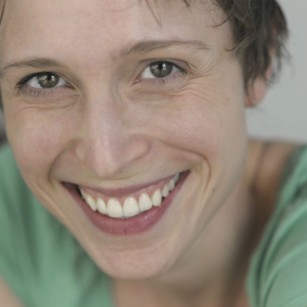 Her short films have screened at festivals worldwide, including SxSW and Toronto; she currently has full-length films in development with Maven Pictures and Co-opent Films.

She has been a finalist or semi-finalist for Seven Devils, BAPF, the Nicholl (twice), and the Heideman Award, has been an honorable mention on the Kilroys list (2014, 2015) and for the Jane Chambers Award (2014), and has been twice-nominated for both the Susan Smith Blackburn Prize and the Lark/PONY fellowship. She is a proud member of The Gift Theatre, former member of the Ars Nova Play Group, and a recipient of grants and/or commissions from Ars Nova, ScriptWorks, The Playwrights' Center, and the Network of Ensemble Theatres. Jenny was the 2014-2015 Hot Seat Local Writer in Residence at Baltimore's Center Stage Theater, where she helped organize their new Playwrights Collective, and the 2016 Resident Playwright at Chance Theatre in Anaheim, CA.

She trained as an actor at Court and Steppenwolf theaters in Chicago, and in playwriting at University of Texas at Austin.  She has taught acting at UT Austin, and playwriting at the Berkeley Carroll School in New York, at UT Austin, and for the Playwrights’ Center.  She is represented by Beth Blickers, Lucy Stille and Amanda Hacohen at APA, and managed by Circle of Confusion. She lives in Austin, Texas.

Jenny Connell Davis's play END OF SHIFT, developed at the Playwrights' Center, will run at Nazareth College from February 16th to February 25th 2018. For tickets and other info, visit: https://www2.naz.edu/events/2270/end-of-shift/

SCIENTIFIC METHOD by Jenny Connell Davis will receive a reading at Rivendell Theatre Ensemble in Chicago, IL on November 3rd at 12:30 PM. For tickets and more information, email Rachel Abrams at rabrams@apa-agency.com