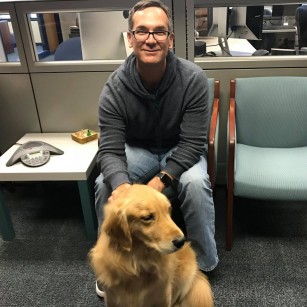 Jake Cline is a Miami-based playwright, short-story writer and journalist. His writing has appeared in The Atlantic, The Washington Post, the South Florida Sun Sentinel, Sierra magazine and elsewhere. As a member of the editorial team that covered the Marjory Stoneman Douglas High School shooting in Parkland, Florida, Cline won the 2019 Pulitzer Prize for Public Service.

His most recent play, "Jenna & the Whale," co-written with Vanessa Garcia ("The Amparo Experience"), received a staged reading on Nov. 17, 2019, as part of Miami New Drama's New Play Lab. Cline's previous play, "Purple Hearts," was given a staged reading on Oct. 22, 2018 by Zoetic Stage at the Adrienne Arsht Center for the Performing Arts of Miami-Dade County. Cline was recently named one of four playwrights to the 2019-2021 class of Miami-Dade County Department of Cultural Affairs’ Playwright Development Program.

He lives blocks from Miami's Little Havana neighborhood with his wife and two dogs.

Following a surfing accident off the coast of Dunes Beach, Florida, Jenna wakes to find herself in the company of a young man named Jonah. He tells her that they are inside the belly of a whale, that he has been here for three years and that there is no chance of escape. Jenna refuses to accept any of that, and she becomes determined to free them both. Meanwhile, as members of Jenna's hometown worry about her fate, an unexpected visitor arrives to challenge the bonds and beliefs of this already fractured community.

Co-written with Miami playwright Vanessa Garcia (Amparo; Grace, Sponsored by Monteverde), Jenna & the Whale is about life, death and who we are in a community and as individuals. It’s about the things we see and what we can’t, the things we know and the things we grapple to understand.

Currently in development with the Broadway Factor, a company founded by producers of Hadestown, The Inheritance, Kinky Boots, Mrs. Doubtfire and other Broadway and off-Broadway shows, Jenna & the Whale received a staged reading from Miami New Drama in November 2019. On June 30, 2020, a reading of the play was broadcast internationally via Broadway On Demand. Proceeds benefited The Sol Project and North Star Projects, both based in New York. 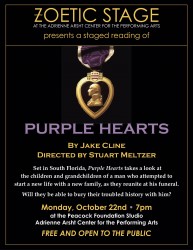 The children and grandchildren of a man who attempted to start a new life with a new family reunite at his funeral. The play examines whether people can truly change, and if those who knew them best, and at their worst, will let them.

A reading of "Jenna & the Whale" was broadcast internationally June 30-July 5, 2020, via Broadway On Demand. Proceeds benefited The Sol Project and North Star Projects, both based in New York.

"Purple Hearts" received a live virtual reading June 18, 2020 as part of Florida International University's Greenhouse program. A staged reading was held Oct. 22, 2018, at the Adrienne Arsht Center for the Performing Arts in Miami. That reading was presented by Zoetic Stage.