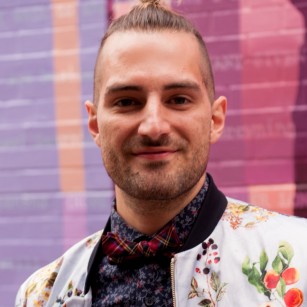 Haygen-Brice Walker is a Puerto Rican-American playwright-creative producer born and raised in the American South and currently dividing his time between Philadelphia and Minneapolis, where he is the 2018-2019 Jerome Many Voices Fellow at The Playwrights' Center. He holds a BFA in Directing, Playwriting, & Production with a focus in Playwriting and a Creative Writing minor from the University of the Arts and is a two-time alumnus of the National Theatre Institute ( Theatermakers 2011, Advanced Playwriting 2012).

His work is a kaleidoscopic clash of caffeine, history, pornography, violence, pop-culture, myth, and magic. Haygen-Brice’s plays find characters trapped in a confused landscape muddled with the taste of the American South; the feel of Appalachia; the blinding desert heat of the Wild West; and the lyricism of Latin America. He was awarded the 2013 Excellence in Playwriting Award from the University of the Arts; a Semi-Finalist for Forward Flux Theatre Company’s THREE NEW AMERICAN PLAYS Commission; a Finalist for the Kennedy Center’s John Cauble Award for Outstanding Short Play; and a Finalist for PLAYPENN’S 2018 Dark Night Reading. He has been developed or produced by Theatre Underground, UArts, The Firehouse Theatre Project (Richmond, VA), Route 66 Theatre (Chicago), Dixon Place, Manhattan Repertory Theatre, The Philadelphia Fringe Festival, Kennedy Center American College Theatre Festival, Interact Theatre Company, Playpenn, and The Playwrights’ Center. He is an alum of PLAYPENN’S The Foundry, a Philadelphia Playwrights' Lab; a Member Playwright of WRITERS ON THE ROCKS; and a 2018/2020 Core Playwright at Interact Theatre Company.

In addition, Haygen-Brice is the Co-Founder (along with Director-Creative Producer, Elaina Di Monaco) of ON THE ROCKS , a production company devoted to the deep fried, late-night, BYOB, theatrical shit-shows Elaina and Haygen-Brice make together. Their theatrical, large-cast, low-budget dumpster fires have played to sold-out crowds in various unconventional venues throughout Philadelphia. ON THE ROCKS is consistently featured on Fringe Top Pick lists by Phindie and DC Metro Theatre Arts magazines. In 2017, Broad Street Review hailed ON THE ROCKS as “the most explosive fringe company in years”. His work with ON THE ROCKS has gotten Haygen-Brice a Creative Genius Grant from SMALL BUT MIGHTY ARTS and the inaugural PLAYPENN/FOUNDRY FRINGE grant.

Each day, Haygen-Brice is one step closer to becoming Jennifer Lopez, which is trite for a gay Puerto Rican, but he's embracing the cliché and living in his truth.