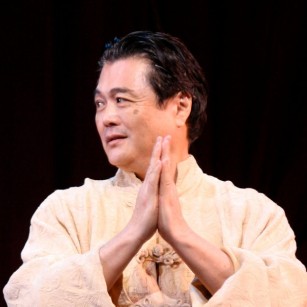 Along with African American writer Alexs Pate, Mura created a multi-media performance piece, Secret Colors, about their lives as men of color and Asian American-African American relations.  This piece premiered for the Walker Art Center, Minneapolis (1994) and has been presented at various venues throughout the country.  A film adaptation of this piece, Slowly, This, was broadcast in the PBS series ALIVE TV in July/August 1995.  Mura’s other performance pieces and plays include, “Relocations: Images from a Sansei” (1990), “Silence & Desire” (1994) and “After Hours” (1995; in collaboration with pianist Jon Jang and actor Kelvin Han Yee).  Mura’s stage adaptation of Li-Young Lee’s memoir, “The Winged Seed,” premiered at Pangea World Theater in Oct. 1997.  His play “Internment Voices,” co-written with Esther Suzuki, received a CLPEF grant and premiered with Theater Mu in June, 1998.   In 2010, Mura played the role of the King in the Bloomington Civic Theater’s production of “The King and I.”  In 2011, he played Kim Phan in “Song of Extinction” produced by Theater Latte Da at the Guthrie Theater in Minneapolis.

A Sansei or third generation Japanese American, Mura has written two memoirs: Turning Japanese: Memoirs of a Sansei which won an Oakland PEN Josephine Miles Book Award and was a New York Times Notable Book, and Where the Body Meets Memory: An Odyssey of Race, Sexuality and Identity. Mura’s novel Famous Suicides of the Japanese Empire was a finalist for the Minnesota Book Award, the John Gardner Fiction Prize and Virginia Commonwealth University Cabell First Novelist Award.

Mura’s poetry collections are The Last Incantations, Angels for the Burning, The Colors of Desire which won the Carl Sandburg Literary Award from the Chicago Public Library, and After We Lost Our Way, a National Poetry Series Contest winner.  His other books are A Male Grief: Notes on Pornography & Addiction and a book of critical essays,Song for Uncle Tom, Tonto & Mr. Moto: Poetry & Identity, published in the U. of Michigan Press Poets on Poetry series.