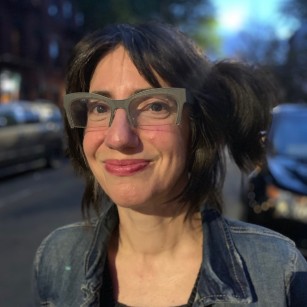 Crystal Skillman is an award-winning dramatist. Plays include: NYTimes Critics Picks OPEN (The Tank/AFO), GEEK (Vampire Cowboys), CUT (Theatre Under St. Marks), as well as PULP VÉRITÉ (Kilroys List), and RAIN AND ZOE SAVE THE WORLD (EMOS Prize). Her new play with music, THIS SHOW IS MONEY (Music/Lyrics Gaby Alter), is currently being developed in The Civilians R & D Group. Crystal is the bookwriter of the musical MARY AND MAX  (Composer/Lyricist Bobby Cronin), which just had its European premiere and recently livestreamed to great acclaim. POSTCARD AMERICAN TOWN, with Composer/Lyricist Lynne Shankel, is currently a finalist for the 2020 SDSU New Musical Initiative. A two time finalist for the McKnight Fellowship, Crystal has been granted two Alfred P. Sloan commissions, received a Clifford Odets Ensemble Play commission, and won the NY Innovative Theater Award for Outstanding Play (THE VIGIL OR THE GUIDED CRADLE). She has cut her teeth in playwriting groups such as Youngblood, Soho Rep’s Writer/Director Lab, WP Lab, and is a member of Ensemble Studio Theater and Rising Phoenix Rep. This summer she will work on two commissions: SEEN and THE ROCKET MEN. TV/Comic Books include: ADVENTURE TIME (Boom! Studios), EAT FIGHTER (WebToon), and OVERNIGHT SUCCESS (Kampfire Films).

All For One Theater & The Tank present the archived world premiere of OPEN by Crystal Skillman. Filmed live at The Tank in June 2019. Directed by Jessi D. Hill. Starring Megan Hill. // OPEN is a magic act that reveals itself to be a resurrection. A woman called The Magician presents a myriad of tricks for our entertainment, yet her performance seems to be attempting the impossible — to save the life of her partner, Jenny. But is our faith in her illusions enough to rewrite the past? The clock is ticking, the show must go on, and as impossible as it may seem, this Magician’s act may be our last hope against a world filled with intolerance and hate.