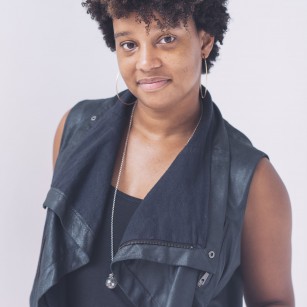 Charly Evon Simpson is a playwright and TV writer based in Brooklyn. Her plays include Behind the Sheet, sandblasted, Jump, form of a girl unknown, it’s not a trip it’s a journey, and more. Her work has been seen and/or developed with Vineyard Theatre, WP Theater, Ensemble Studio Theatre, The Lark, P73, NNPN, The Eugene O’Neill Theater Center, PlayMakers Repertory Company, Chautauqua Theater Company, Salt Lake Acting Company, and others. She is a recipient of the Vineyard Theatre’s Paula Vogel Playwriting Award and the Dramatists Guild’s Lanford Wilson Award. She is a resident of New Dramatists and a Core Writer at The Playwrights’ Center. She’s a former member of WP Theater’s 2018-2020 Lab, SPACE on Ryder Farm’s The Working Farm, Clubbed Thumb’s Early Career Writers’ Group, and Ensemble Studio Theatre’s Youngblood. In TV, she has worked on Showtime's American Rust and she currently has an overall deal at HBO where she has worked on several shows including the second season of Industry. Charly has a BA from Brown University, a master’s in Women’s Studies from University of Oxford, New College, and her MFA in Playwriting from Hunter College.

Join us for a year filled with boundary-pushing work by Women+ artists that challenge what theater is today. From another exhilarating collaboration with Monica Bill Barnes & Co., a choose-your-own-adventure audio exploration of WP’s theater space, a deeply moving, funny and theatrically adventurous play by WP Lab Alumni Charly Evon Simpson, and the cultivation of a cohort of evolving artists with The Pipeline Festival and viBe Pages to Stages, we can't wait to welcome you back to WP.