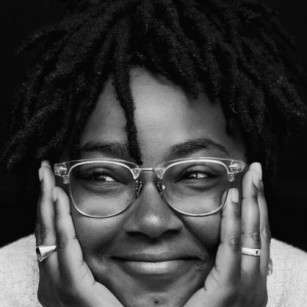 C. A. Johnson
she, her, hers
Affiliated Writer
Brooklyn, NY
C.A. Johnson is a playwright working and writing in New York City.
[contact]
Website
Twitter
Linked In
Biography

C.A. Johnson is a Brooklyn-based playwright originally from Metairie, Louisiana. Her plays include ALL THE NATALIE PORTMANS (MCC Theater), THIRST (2017 Kilroys List, CATF), THE CLIMB (Cherry Lane Mentor Project), AN AMERICAN FEAST (NYU Playwrights Horizons Theater School), and I KNOW I KNOW I KNOW. Most recently she was the Tow Playwright in Residence at MCC Theater. She was previously the 2018 P73 Playwriting Fellow, The Lark's 2016-17 Van Lier Fellow, a Dramatists Guild Fellow, a member of The Working Farm at SPACE on Ryder Farm, A Core Writer at The Playwrights Center, a member of The Civilians R&D Group, , a Sundance/Ucross Fellow and a 2018 Sundance Theatre Lab Fellow. Her work has been developed with The Lark, PlayPenn, Luna Stage, Open Bar Theatricals, The Dennis and Victoria Ross Foundation, and The Fire This Time Festival. BA: Smith College MFA: NYU

Samira and Greta lead a peaceful life. They have their own clearing in the woods, their own hut, and their son Kalil to keep them laughing.  When Kalil returns home one day without their water rations, however, Samira and Greta find themselves in conflict with their local political leader. Set in a tense segregated society, Thirst is a complex look at race and love in war-time.

Marge is a photographer, and her wife Tiffany has been her sole photographic subject for seven years. When Tiffany goes on a month-long hiking trip to get away from it all, both women are forced to question everything from their professional and personal past to the true meaning of a moment captured in time.

Keyonna is sixteen years old, extremely close with her older brother Samuel, and dreams of a better tomorrow. When brother and sister find themselves on the brink of eviction, however, their tenuous life on the edge of the poverty is forever changed by a few hundred dollars, a pretty girl, and a famous Hollywood actress.

Cassidy and Bea are getting married and they've carefully planned a small, uneventful wedding weekend. When Cassidy's younger brother arrives, however, the wedding comes to a crashing halt.  Standing on the border between her past and her future, Cassidy must decide what she values most: her origin story or her future.

When Zoe’s wife goes missing (again), her lifelong best friends join her on the island off the coast of Virginia where they spent childhood summers. A play about women, friendship, wild ponies, and love that lasts forever. (Which is to say it is also a play about betrayal…betrayal again and again and again).

Iris is an artist. Iris dates Tanya. Tanya is a lawyer. Tanya dates Iris. Anthony is a curator who wants Tanya and Iris to breakup. Mar, an anthropolgist, is just happy to be included, or maybe she loves Iris too. Either way, Iris's mother Anna is coming to town and everbody's gonna need to figure their shit out or else.

The New York Civil Liberties Union (NYCLU) has announced their new Artist Ambassadors program, a multidisciplinary partnership between the organization and the performing arts community. The program will engage, educate, and empower arts community members who are passionate about the intersection of art and social justice.

“The fight for justice doesn’t just take place in the streets, courts, legislatures, and polls. It also takes place on the stage,” NYCLU executive director Donna Lieberman said in a statement. “The NYCLU is ecstatic to partner with New York’s creatives to build bridges between the arts and activism.”

The inaugural class of ambassadors includes over 50 members of the performing arts community and is coordinated by producer Ari Conte. The program is co-chaired by composers and performers Shaina Taub and Arianna Afsar.

The ambassadors include playwrights, actors, producers, and photographers, among others. The 2021 class includes C.A. Johnson.

C. A. Johnson selected as one of the playwrights to participate in the 19th annual Sundance Institute Playwrights & Composers Retreat.

Affiliated playwright C.A. Johnson has been named the 2018 P73 Playwriting Fellow. She will receive a $10,000 award, and another $10,000 to put toward play development. You can read more about it here.