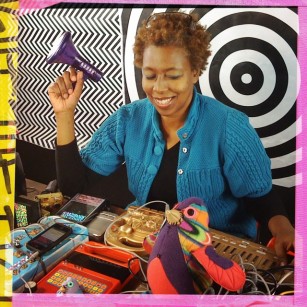 Bianca Janine Pettis is a professional artist based in Minneapolis, MN. She completed the Pre-Professional Actor Training Program at North Carolina School of the Arts and holds a BA in Theatre at Antioch College (1996) and an MFA in Fine Art (2017) from the University of Minnesota.

As a youth, Pettis was primarily an actor and playwright having worked with local theatre companies like Frank Theatre, Bedlam Theatre, Penumbra Theatre and she worked as an actor at the Science Museum of Minnesota. As a theatre artist, she received a Minnesota State Arts Board Artists Initiative Grant (1998) and a Many Voices Fellowship from the Playwrights Center (2000). She’s also written and performed several solo shows including "The Besides" and "Exterminate Your Love."

Since 2003, she's worked in tandem with her husband and creative partner, Jacob Aaron Roske, as the sound art duo Beatrix*Jar. From 2003 - 2014, Beatrix*Jar actively toured the country leading hands-on Circuit Bending Workshops paired with live sound collage performances and events they call “Audio Playgrounds” inspired by John Cage and the Fluxus Movement.  The duo has been featured at the Andy Warhol Museum, ICA Boston, Hammer Museum and the Walker Art Center. Beatrix*Jar was awarded a Minnesota Composers Forum Subito Grant and a Bush Artist Fellowship in Media Arts (2010). They've released three albums of note: "I Love You Talk Bird" (2006), "Golden Fuzz” (2008) and "Art Star"(2010).

Pettis discovered herself as a visual artist in 2015, while enrolled as a graduate student at the University of Minnesota. As a student in the Art Department she explored painting and printmaking. Her visual work is playful, colorful, and indeterminate. She approaches her visual art practice as a performer - with a “Yes...and” approach, opening herself up to the moment, allowing the work to unfold before her. Her visual work brings to life idiosyncratic characters inhabiting a world of courageous anxiety. Pettis love to creates large scale mural work. Her work was featured at the Rochester Art Museum Andy Warhol Exhibition "Minnesota Goes Pop”. After graduating in 2017, she was commissioned to paint a mural for the Salvation Army Harbor Lights in Minneapolis and received a Jerome Residency for Emerging Printmakers at Highpoint Center for Printmaking.

Most recently she’s worked as a Set Designer for “School Girls, or the African Mean Girl Play” at the Jungle Theatre in Minneapolis. She also worked as a Production Manager and Set Designer for the zAmya Theatre Production “Stories from the Book of Harbor Light” inspired by the mural she painted for the Salvation Army Harbor Light.  She is also designing a Playground for the Western Sculpture Park with Public Art St. Paul and St. Paul Parks and Rec.