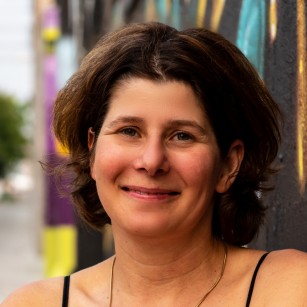 Andrea Stolowitz is an internationally produced playwright working in Portland, OR and Berlin, Germany. Andrea works in traditional and experimental theater, opera, and audio both as a solo artist and also with the devised theater ensemble Hand2Mouth Threatre. Andrea's work embraces performative theatricality, evocative language, and visceral storytelling. She often uses interviews as a basis for her work. Her plays range from intimate portrayals of the human condition to the intersection of national history on private lives.

Andrea’s latest play Recent Unsettling Events is an Artists’ Repertory Theatre Commission and won the 2020 Portland Civic Theater Guild's New Play Prize and the 2020 Blue Ink Prize from American Blues Theater. It is a finalist for the Oregon Book Award.

Andrea’s play The Berlin Diaries is a recipient of the City of New York Mayor’s Office of Media and Entertainment  Women’s Film, TV and Theatre Fund. The play was to be produced in New York City in March 2021 and will be rescheduled to a post COVID date. The Berlin Diaries was first presented at the English Theater Berlin/International Performing Arts Center and Portland’s Hand2Mouth Theatre Company. It was developed at The Playwrights’ Center, New Dramatists, PlayPenn, and The New Harmony Project. It has just been released as an audio drama which can be heard here.

Knowing Cairo world-premiered at the Old Globe Theatre, which earned San Diego’s “Billie” Best New Play Award and an LA Times’ Critic’s Pick. It is published by Playscripts Inc. and continues to be produced nationally and internationally.

Andrea works as a collaborating writer with the devised theater ensemble, Hand2Mouth theater. Their collaborations on The Berlin Diaries, Pep Talk, Psychic Utopia, Time A Fair Hustler, and Dream Logic have toured regionally, nationally, and internationally. The San Francisco Chronicle calls their work, "at once a collective unburdening…in the way the best drama has always been, while also being very funny and self-aware.” Andrea is the Lacroute Playwright-in-Residence at Artists Repertory Theatre, a member of New Dramatists class of 2025, an affiliated artist with The Playwrights’ Center.

Lacroute Playwright-in-Residence and three-time Oregon Book Award-winning playwright Andrea Stolowitz’s The Berlin Diaries, the autobiographical story of Andrea’s quest to untangle her family’s history. The play is scheduled to premiere off-Broadway in NYC in March 2022.

Andrea Stolowitz's RECENT UNSETTLING EVENTS won Portland Civic Theatre Guild's New Play Award. The play will have a Portland presentation in the winter of 2020, then a week-long public showing and workshop in New York City in the spring of 2020. More information here.