If you're thinking about writing a puppet play

This description of Haruki Murakami’s fiction aptly describes what you can achieve with puppetry:

The story and surface together sound both hokey and random, which points to the most perplexing part … [the] fictions are so consistently transporting. Not every time, but often enough that it seems like another mathematical impossibility. Reality dials in and out, and the work respires with genuine emotion, and this happens within and not despite the clunky structures.
(from Harper’s, Oct 2014, “The Monkey Did It,” by Rivka Galchen)

If you’re new to writing puppet plays and are thinking about it, consider: are you happy thinking in contradictions? Puppetry is a perverse form. Not puppetry for children—they are already perverse: they live in a hallucinogenically animated world. For adult-centric puppetry, ask whether you are served by the following contradictions: 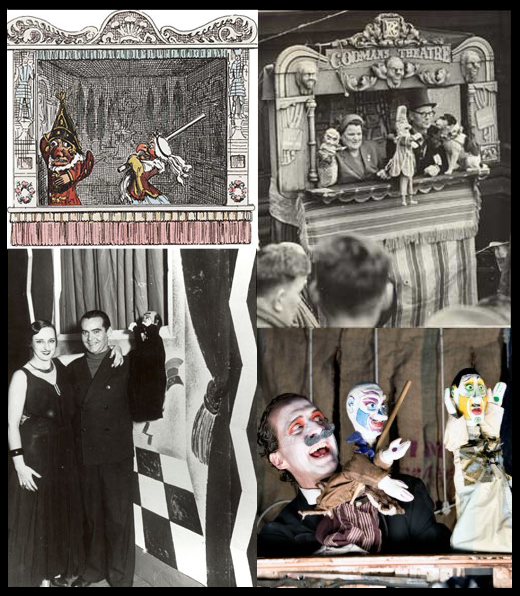 HOW TO DEVELOP AN IDEA?

Not all script ideas are suitable for puppetry. Here are some thematic impacts that could jumpstart research for a script:

In a puppet play, design develops action that develops language. Puppets have their own exigencies that lead to a poetics that is specific to that object-creature. The writing and form marry best through a long rehearsal process.

Successful puppet work begins from an intuition born of experience, an inkling of an idea that, when paired with an image or a movement, could mean something greater than its parts. Language, object, and circumstance in cahoots bring the story into being. The process juggles making and rehearsing and writing throughout the rehearsal period.

KEEP IN MIND WHILE WRITING…

In performance, puppet theater encourages a group of people to believe life can be made from things that are not life. Stage theater, on the other hand, encourages the belief that things are not what they seem. Achieving a group belief in not-life can have the following ramifications:

Working with puppets gives you the opportunity to make of these concerns a piece of writing that is vulnerable, helpless, has the power to inscribe all four dimensions at once, exudes holiness, stinks, and can be a conduit for us to make the most of our humanity.