Experimenting with language and the body

“How do you experiment with language and the body?”

This is a question I hear a lot, as a playwright who has spent the past five years working with movement-based artists. My initial answer is often something unhelpful like, “Well, it depends on the collaborators and the project.” It’s not that I don’t want to share; but this question can be difficult to unpack quickly.

For one thing, the “how” is inextricable from the “why”—and incidentally, I ask “why” a lot. Like, what is a play, and why? What is performance, and why? Or—my favorite lately—what is a story, and why? “Story” in particular is this word that shapes our lives, the means by which humans connect, livings are made, and history is written (and revised). One very important question, of course, is who gets to tell what stories? But lately, I’ve been preoccupied with the even more fundamental and elusive question of what comprises a story in the first place. What assumptions about its definition and function do we make on a daily basis—and what are the implications of those assumptions?

For now, I’ll spare you a larger bucket of questions about the great fathers of story like Aristotle and Joseph Campbell, their influence not only on theater but also marketing, capitalism, patriarchy, politics, systems of power… again, not easy to unpack quickly. The point is that I’m a big believer in the importance of questioning the nature of story, because I think there’s a dire need, always but especially now, for people to exercise their imaginations and think expansively about what is and what could be. These questions have made me curious about how people learn, experience, and feel, leading to new questions about how language works, how bodies move through space and time, and how we can keep challenging what we think we know; and those questions have led to collaborations with many different kinds of artists, especially movement-based ensembles and individuals like SuperGroup, Fire Drill, Laura Holway, and Terry Hempfling. Through this work, I’ve been blown away by all that bodily awareness can teach us, let alone crack open in writing.

“Okay. So how do you experiment with language and the body?”

It really does play out differently with each collaborator and project. But for playwrights interested in ways to simply start exploring possibilities, here are some places to start.

1) Pay attention to your body.

Ditch your writing implements and lay on your back, on the floor. Relax your limbs, palms up. Notice: Where are you holding tension—in your shoulders? jaw? hips? feet? How much sleep and what food have you had in the past 24 hours? How differently do you feel when you have or lack water? alcohol? protein? greens? We are so profoundly affected by these factors, yet so quick to ignore them. Consider: How do you feel right now, and why? After you have spent at least 15 minutes tuning in, write with this observation of your body as the starting point.

Optional: As you write, play with leaning into and pushing against your current state. Eat something. Run around the block. Put on music that suits or clashes with your mood. Pay attention to how these actions impact the flow and content of your writing.

This exercise can be done as a warmup or to generate material, alone or with collaborators. Set a timer and improvise movement for 15 minutes—literally, have your own private dance party—but push beyond habit to move your body in unexpected ways. When the timer goes off, have a notebook ready and write for 15 minutes. Don’t talk or do anything else in the transitions. When the timer goes off again, go back to moving. Repeat this cycle as many times as you want. Don’t worry about making “good” or “meaningful” movement or words. Don’t think at all, if possible – try to relax into a flow state. Notice how it feels to transition from pure physicality to the action of accessing language and vice versa. If you get tense or think too much, focus on your breathing and keep going.

Optional: Film the moving sections, so that you can observe yourself or even cull specific pieces of movement to learn later.

In the earliest days of my collaboration with SuperGroup, we weren’t sure how to begin. Finally we decided that I would write some text; they would respond with movement; and then we’d layer both and see what happened. As this process played out, SuperGroup didn’t just respond to my text, but drew directly from it to create movement. For example, repetition of words might offer a parameter for a structured improvisation (“create a gesture that repeats”). Themes and images in the text served as movement prompts (“play with the idea of slow subtle change as you move, starting in one place and ending up in another” or “become an animated GIF”), as well as inspired overlays of character that could come and go (“as you move, see what happens as these different personalities bubble up and dissipate”). So for this exercise: Take a piece of existing writing and, alone or with a collaborator, cull it for movement possibilities. Don’t focus too much on literal cues; “she walks to the door” shouldn’t prompt walking to a door. Instead, explore more nuanced ways the writing can inform movement. For example, “door” offers a sense of opening and closing. What could it mean to open and close your feet? ears? elbows? spine? Make a list of possibilities, then try them out.

Optional: As a next step, see if you can learn a few of movement phrases well enough to repeat; then speak the original text over that movement (you’ll need to memorize the text or have one person read while the other person moves). See what happens as words and movement align or clash.

4) Look to the body for structure.

One relationship between language and the body that people have contemplated for decades is how so-called traditional dramatic structure – journey, arc, climax, catharsis, etc. – mirrors the male orgasm. For this exercise, consider other examples of structure offered by our bodies. What is the structure of a sleep cycle? Menstruation? Menopause? Aging? What is the structure of a body’s experience on a flight or swimming through water? Brainstorm a list, then reimagine an existing piece of writing through at least three different body-inspired structural lenses. Be open to surprising developments, such as plot with no conflict; exchanges that invite audiences to observe rather than experience emotions; or a play that is way shorter than you think it should be, toward leaving more space for nonverbal events.

Optional: After you’ve tried on different structures, use those structures as prompts for movement (“what does a sleep cycle dance look like?”). Then play with layering pieces of that movement over sections of writing, inserting it between scenes, or using it as a springboard for additional new writing. 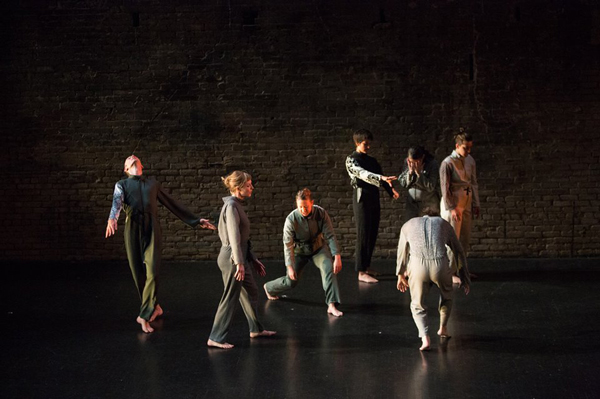 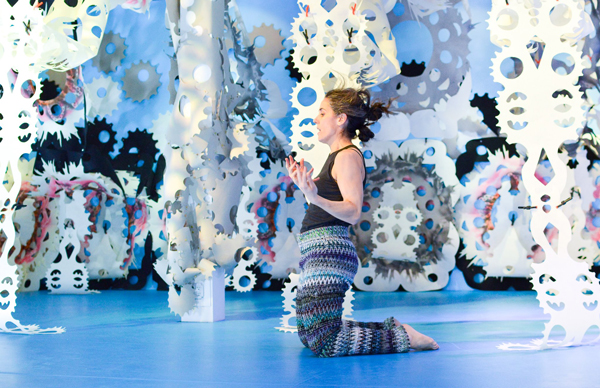 Still image from In Which _______ and Others Discover the End, created by Rachel Jendrzejewski in collaboration with SuperGroup, Public Functionary, 2015 (photo by Theo Goodell) 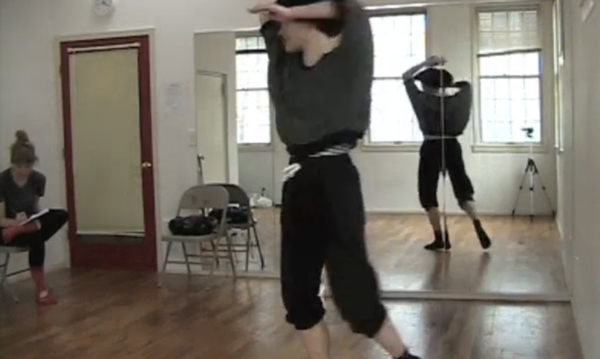 Rachel Jendrzejewski is a Core Writer at the Playwrights’ Center. Find her at http://rachelka.com and on Twitter @rchlka.