Queer Forms at the University of Minnesota: seven.years.of.shed.skin... 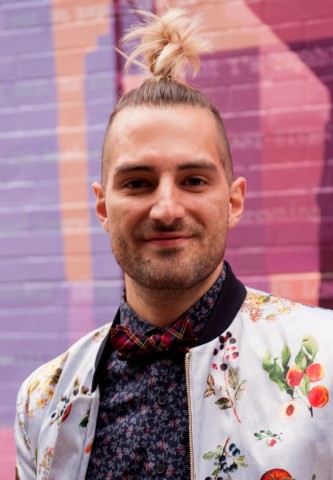 Dramatic reading of a new theatrical script written by Haygen-Brice Walker, commissioned by the Playwrights’ Center and the Katherine E. Nash Gallery. Followed by conversation with Haygen-Brice Walker; Jeremy B. Cohen, Producing Artistic Director of the Playwrights’ Center; and Judith Katz, Minneapolis-based author and winner of the Lambda Literary Award for Best Lesbian Fiction.

seven.years.of.shed.skin... is a play about first dates, dating apps, instas, finstas, celebrity, catfish, Kelly Rowland, and how to find remnants of our true selves in the technological wasteland of social media. Damien and Tobias "met" online seven years ago when Tobias was pretending to be Nate. Nate doesn't really exist, but his pictures were stolen from Linc (an Instagram-verified fitness influencer) who is now engaged to Damien. Tonight Damien and Tobias are meeting in person for the first time to forgive and forget...except Tobias isn't sorry and Damien can't forget.

Haygen-Brice Walker is a Puerto Rican-American playwright-creative producer born and raised in the American South and currently dividing his time between Philadelphia and Minneapolis, where he is the 2018-2019 Jerome Many Voices Fellow at The Playwrights' Center. He holds a BFA in Directing, Playwriting, & Production with a focus in Playwriting and a Creative Writing minor from the University of the Arts and is a two-time alumnus of the National Theatre Institute.

This event is a part of Queer Forms, a multidisciplinary group exhibition and series of public programs that investigates and celebrates the history, politics and culture of LGBTQ+ Liberation across a range of artistic forms and perspectives. Queer Forms coincides with the anniversary of these important historical markers in the history of LGBTQ+ Liberation: the 50th anniversary of the establishment of FREE (Fight Repression of Erotic Expression), a Gay student organization at the University of Minnesota, and the Stonewall Rebellion in New York in 1969; and the 60th anniversary of the resistance to police harassment of LGBTQ+ people at Cooper’s Donuts in Los Angeles in 1959.