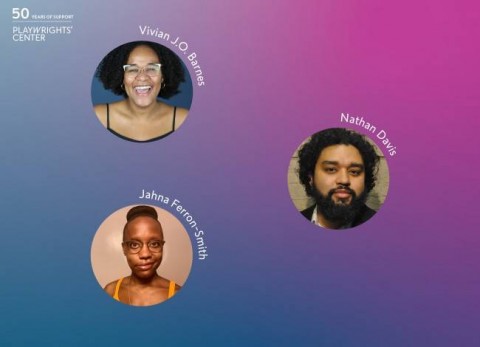 As part of its 50th Anniversary Season, Playwrights’ Center announced on February 15th that it will serve as the new home for the prestigious Venturous Playwright Fellowship. This fellowship selects three risk-taking, innovative writers and their “venturous” plays, which are challenging in form, controversial in subject matter, ambitious in scale, and/or experimental in concept. The fellowship provides them with two years of residency funding and production advocacy. Made possible by the support of the Venturous Theater Fund of the Tides Foundation, the fellowship was previously led by The Lark Play Development Center, which announced its closure in October 2021. Founded in 1994, The Lark emphasized bold artistry through a portfolio of fellowships, such as the Venturous Playwright Fellowship.

“Following in the footsteps of our great colleagues at The Lark, it is a true honor to now take leadership of the Venturous Fellowship in partnership with Venturous Theater Fund,” said Playwrights’ Center Artistic Director Jeremy Cohen. “As we continue designing and building Playwrights’ Center towards our next 50 years, this partnership with Venturous Theater Fund is a celebration of our mutual investment in ensuring bold, distinctly-theatrical work populates stages around the world.”

Playwrights’ Center has worked diligently with The Lark and Venturous Theater Fund to carry on the original mission of the Fellowship, while making adaptations to ensure the Center may bring the full weight of its resources to bear.

“One of the unique aspects of this fellowship is that it encourages experimentation and risk-taking, providing writers with the support they need to tackle challenging and ambitious work,” according to Playwrights’ Center Associate Artistic Director Hayley Finn. “In addition, it incentivizes theaters to produce these works, creating pathways for these writers’ ambitious work to reach audiences.”

The Fellowship has served nine playwrights since its inception, including Playwrights’ Center Affiliated Writers Dipika Guha and Susan Soon He Stanton. The Venturous Fellows (and their plays) whose cycles are currently in progress are Vivian J.O. Barnes (The Sensational Sea Mink-ettes), Nathan Alan Davis (Eternal Life, Part 1), and Jahna Ferron-Smith (THE WOODS).

“I've experienced a real focus on listening and taking care of the specific needs of the artists instead of rushing us toward some agenda that is really just benefitting the institution,” says Barnes of the Fellowship. “To me, that way of working is rare and I'm so grateful for it.”

More About the Venturous Playwright Fellows

Vivian J.O. Barnes, a writer from Virginia who is based in Los Angeles, is a member of the Geffen Playhouse’s 2021-2022 Writers’ Room. Her plays have been produced at Actors Theatre of Louisville's 44th Humana Festival, Steppenwolf Theatre, and Montana Repertory Theatre. She has developed projects at Clubbed Thumb and Ojai Playwrights Conference. In the TV world, she has staffed on shows at Amazon and UCP/Peacock.

Nathan Alan Davis’ plays include The High Ground (upcoming, Arena Stage), Nat Turner in Jerusalem (New York Theatre Workshop; Stavis Playwright Award), Dontrell Who Kissed the Sea (NNPN Rolling World Premiere; Steinberg/ATCA New Play Citation), and The Wind and the Breeze (Cygnet Theatre; Blue Ink Award, Lorraine Hansberry Award). Recent honors include a Windham-Campbell Prize (2021), a Steinberg Playwright Award (2020), and a Whiting Award in Drama (2018). Nathan is a graduate of Juilliard, Indiana University Bloomington, and the University of Illinois at Urbana-Champaign. He is a Lecturer in Theater at Princeton University.

Jahna Ferron-Smith is a recently graduated Lila Acheson Wallace Playwriting Fellow from The Juilliard School. She is also a member of the Interstate 73 Writers Group and Youngblood playwriting collective, part of Ensemble Studio Theatre. Her plays have been performed at EST and the Samuel French Off-Off Broadway Short Play Festival, including Running While Black (OPC Foundry Project), THE WOODS. (The Lark Venturous Playwriting Fellowship, developed at SPACE on Ryder Farm), and SIR. (published by Samuel French).

Venturous Theater Fund (VenturousTheaterFund.org) supports innovative approaches to theatrical production by encouraging playwrights and other theater-makers to take risks in the creation of new work for the stage. Venturous seeks to help writers achieve the freedom to write the plays they fear would otherwise go unproduced; and to enable not-for-profit producing organizations to say “yes” instead of “no” to worthy but challenging projects that involve controversial subject matter, large casts, or other perceived obstacles. Through its Venturous Capital Grants program, Venturous provides funds for small and medium-sized theaters to underwrite extraordinary production expenses for ambitious new plays—specific costs that a theater might otherwise be unable to incur. Since its founding in 2011, Venturous has also supported playwright collectives, writers who self-produce, playwright-driven initiatives, and playwright service organizations.