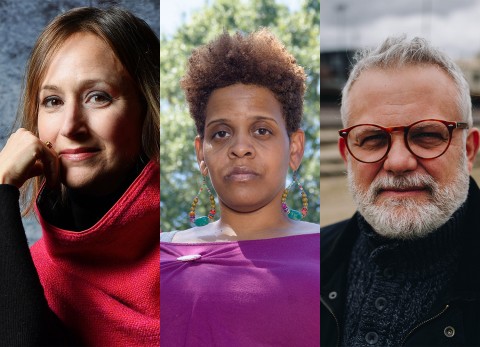 This year's McKnight National Residency and Commission recipient is Heather Raffo, an award-winning playwright and actress whose work has been seen Off-Broadway, Off-West End and in regional theater and in film. Her plays have been hailed by The New Yorker as “an example of how art can remake the world.” An American with Iraqi roots, Raffo’s work bridges national main-stages with cultural centers, urban with rural communities and has been performed across America and internationally for almost two decades, taking her to the Kennedy Center, The Aspen Ideas Festival, London’s House of Commons, the U.S. Islamic World Forum and into hundreds of classrooms across the nation and internationally.

The 2019-20 McKnight Fellows in Playwriting are W. David Hancock and Stacey Rose.

W. David Hancock is a two-time Obie Award-winning playwright. His plays include The Convention of Cartography, The Race of the Ark Tattoo, Deviant Craft, and Master. Hancock’s work has been produced by numerous theaters around the country and abroad, including the Foundry, Clubbed Thumb, Rude Mechs, the Abbey Theatre (Dublin), and Théâtre des Carmes (Avignon). The Race of the Ark Tattoo was recently installed at the Christian Bernst Gallery (Paris). Hancock’s fiction has appeared in The Massachusetts Review, Hunger Mountain Review, and Chicago Quarterly Review. His awards include a Whiting Writers’ Award and the Cal Arts/Alpert Award in Theatre.

Stacey Rose hails from Elizabeth, N.J. and Charlotte, N.C., respectively. She earned a B.A. from UNC Charlotte and is an alum of the M.F.A. program in Dramatic Writing at NYU Tisch School of the Arts. While at Tisch, she was the recipient of an AAUW Career Development Grant, was a Future Screenwriting Fellow, and was honored with The Goldberg Prize for her play The Danger: A Homage to Strange Fruit. Stacey’s work celebrates and explores Blackness, Black identity, Black history, body politics and the dilemma of life as the “other.”