The third play in our 2017-18 Ruth Easton New Play Series is Three Quarter Inches of Sky by Sherry Kramer, with readings February 5 and 6, 2018, at the Playwrights' Center. In this interview, Associate Artistic Director Hayley Finn talks with Sherry about the origins of the play, the nature of time and memory, and her upcoming book on playwriting.

Why did you write this play?

Then about a year and a half ago, Dina Janis, the artistic director of the Dorset Theatre Festival, said to me, “Sherry, do you have a new play? I’d like to give you a workshop slot this summer.” I said to her, “Yeah, I do!” and I did not have a new play. So I took the short story, and wrote this play.

Had you written many short stories before?

Oh, yes. I started as a fiction writer. I got my first MFA from the Iowa Writers’ Workshop in fiction.

How did you end up transitioning into playwriting?

When you’re at the fiction workshop, there’s also the Iowa Playwrights Workshop, so you could just walk across the river and sit in. I did that, and they accepted me. And then I was on the “two MFAs for the price of one and a half” plan.

Then when you left you decided to really pursue playwriting?

How did you decide that Classics Illustrated comics were going to be such a prominent part of the narrative of Three Quarter Inches of Sky?

I ordered one as a gift for a friend from a company that was reprinting them. But the comics were smaller, and I noticed that the amount of sky above the title was smaller than in the original, too. And I thought “playing the Classics Illustrated Game” with my brother would be so much harder with these reissues.

Can you describe the game?

It was a memory game, ultimately. A couple dozen skies were really unique, but most of them had nothing special about them; there’s no clue but a slightly specific shade of blue. We had like a hundred Classics. You had to win from three quarter inches of sky. That’s all you had.

You call it a memory game; could you talk a little bit about how memory features in the play?

I became obsessed with the relationship between time and memory a couple years before I started writing this play. This has happened to me a couple times, where I become obsessed with an idea, I teach a class about it for which I do an enormous amount of research, and then I write a play that comes out of that—completely sideways but on purpose. The class was called “Time, Memory, and Meaning Making.” I had spent six months doing as much research as I was capable of understanding about how memory and time perception work. I came to understand that what we think about as time is really memory. I began to think about how we have completely different memories from our family members—you were there at the same time and yet you grow up in different families, in a way, because of how memory works. Your brothers and sisters—especially once your parents are gone—hold your childhood. There’s no one else who remembers it. The memory or the reality of your childhood is held inside them. That was an interest to me, about the nature of memory.

Also, remember when everyone started talking about memory reconsolidation a couple years back? Researchers said that everything you remember, every time you remember it, you change it. The act of remembering something means that you’re not remembering it as perfectly as you did the last time, and the time before that. To give an example, the only memory of a first kiss that is perfect is the first kiss that is had by someone who can’t remember it—if the memory is locked inside a brain that doesn’t have access to it. When you remember your first kiss, you change it every time you remember it, so the memory that you have of it now has been completely rewritten by the neuro-chemicals it takes to recall it, feel it, and send it back to storage.

You tell the story in segments titled “Pie 1, Pie 2, etc.” rather than as “Scene 1, Scene 2 ,etc.” How does this choice inform the structure and tenor of the play?

It is my belief that every play has a clock. I wanted to invite the audience into that. The play starts with a timer for how long it takes a chicken pot pie to cook and the play finishes in that timespan. Each scene involves a narrative of the difficulty in getting the chicken pot pie which is given to the main character’s father in each scene. Each pie is different. That’s the structure, and it also gives the audience a sense of time.

You are a teacher and a mentor to many other writers. How has this affected your work and your artistic life?

There is a tremendous amount of joy. It’s an amazing thing to be able to teach the students that I teach at the Michener Center for Writers, the Iowa Playwrights Workshop, and at Bennington College. Teaching has put the bulk of my time and energy into things other than writing, so I don’t write as many plays. But I am almost finished with my playwriting book.

Tell me about the book.

It has two titles at the moment. I’m struggling between A Play Takes Place in the Audience and A Place to Stand. The subtitle is “How Meaning is Made in Time-Bound Art.” I’m obsessed with the way that the time-bound nature of our art form makes it different from other word-based art forms—like poetry and fiction. I’ve been teaching for so long, and I have all of these exercises from my students that I’ve saved, so their work is a part of the book. When we’re on a certain topic, I’m trying to include their thoughts as much as possible, to make it more like a collaboration, because that’s the art form that we’re in.

Is it for playwrights at any stage in their career?

I can’t wait to read it.

I have to tell you, the person who wants me to finish it the most is my father. He says, “How’s the book?” every time I talk to him. I talk to him twice a day, and every day he says, “How’s the book coming?” and I go, “It’s coming along,” and he says “I want you to finish it. I’m so tired of hearing about it.” Its completion will make many people happy for all the wrong reasons. 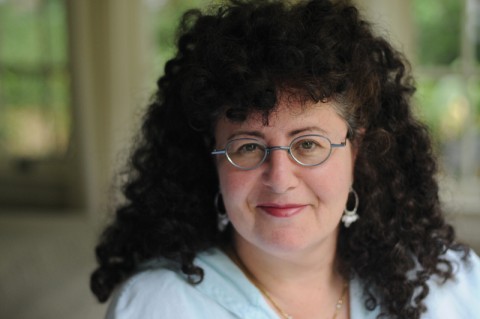