Tell us about Le Switch.

Every time I attempt to describe my play, I end up sounding like that sinister minister from the Princess Bride with the speech impediment. “Mawwiage. Mawwiage is what bwings us togevvahhh today.” But, in the current state of… the States, it seems more and more that Mawwiage is what divides us. At least our “stance” on marriage, as if anyone could have a stance on it. That’s like having a stance on—oh I don’t know—Oxygen (personally, I'm for it.). But, as our country actively pulls itself apart over something designed to bring us all closer together, I wanted to focus on the personal cost of the national struggle. At its heart, Le Switch is a romance about people who actively fight to marry their lives to one another, even when every possible divide stands between them. Le Switch is a full-on romance, and that’s what most excites me about it. It’s a story where, if we fight for it, “Wuvv, Twue Wuvv, will fowwow you fowevvuh.”

What else are you working on this year?

Why do you write plays?

For the story-telling of it. My mind thinks in plays. I was raised in the theater; it’s how I deliver and receive stories. It’s how I perform my self onto the world. Whatever that means. For the collaboration of it.

What playwriting/theater advice do you have for others?

Patience is key. I have to remind myself this all the time. I find most of the time, if I’m struggling with some aspect of playwriting—regardless of what it is—the answer is usually “Just be patient.” I think “relax” is some of the most difficult advice to receive, but, man, if you can just relax and take it all in, you’ve got it made.

Who or what inspires you?

My students inspire me. I teach all over the city of Chicago, all ages, all experience levels. And I’m starting to have the opportunity to teach all over the country. My students inspire me to be a better writer, to practice what I preach, and to lead by example. Also, different writers. Nothing makes me want to write like seeing a truly AMAZING play. August and Lanford Wilson, Tennessee Williams, Hugh Whitemore, Thornton Wilder. Basically anyone with a W last name. But really too many to name.

What are you looking forward to this year, artistically?

Finding new artistic homes, making new play-maker playmates. I think of different theaters as portals between worlds, and the plays I write give me access to these worlds through these different portals. I love popping up in new portals, exploring new worlds and families, learning more about how different communities/worlds like to tell and receive their stories.

I’m also looking forward to finishing a few of the projects I’ve got going on.

Lots of post-it notes. I do a fair amount of research, interviewing, field work, and I write every single thought down on its own post-it. Then I spread out my post-its, move ‘em around, organize them into something resembling a story line, and then I see if I have a play or not. Then I smoosh them all up on the wall behind my computer, and I take them down one by one as I write them into my play. That way, I can see exactly how much of the play I have left to write.

What kind of theater or art excites you?

All of it. As long as it’s earnest. I like Children’s Theater. I like experimental theater. I like nearly every style, genre, form, etc. I like when the world created onstage is so engrossing that I have to readjust to the “real” world upon leaving the theater. I like language plays, movement plays, theater of compassion and theater of cruelty. I don’t necessarily think I’m the best playwright for creating every type of play, but I can pretty much get excited about anything.

At heart, though, I’m a romantic. So, a good romance will pretty much always pull me in.

Marriage equality finally reaches New York, and commitment-shy David finds himself unsure how to react. Nervous in the face of “wedding fever,” he retreats to his home full of unopened books and his grieving activist roommate. When his best friend’s bachelor party takes him to Montreal, he is unexpectedly swept off his feet by a beautiful young florist. In the months that follow, David and his non-traditional family have to decide for themselves what it really means to be committed, what it means to be married, and what it means to be queer.

Philip Dawkins’ work includes the recent Joseph Jefferson Nominated world premiere of Miss Marx: or the Involuntary Effect of Living (Strawdog Theatre) as well as recent critically-acclaimed plays The Homosexuals and Failure: A Love Story which both also received Joseph Jefferson Nominations for New Work after their world premieres with About Face Theatre (2011) and Victory Gardens Theater (2012) respectively. His plays for young folks are published through Playscripts, Inc. A graduate of Loyola University, Chicago, Mr. Dawkins is an Artistic Associate of About Face Theatre, an Ensemble Playwright at Victory Gardens, and a founding member of Chicago Opera Vanguard. Mr. Dawkins teaches playwriting at Northwestern University, his alma mater Loyola University Chicago, and through the Victory Gardens ACCESS Program for writers with disabilities. He also teaches Kung Fu to little Chicago kids through Rising Phoenix Kung Fu. Hi-Yah! 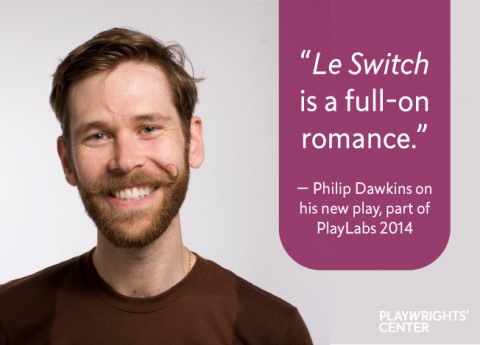