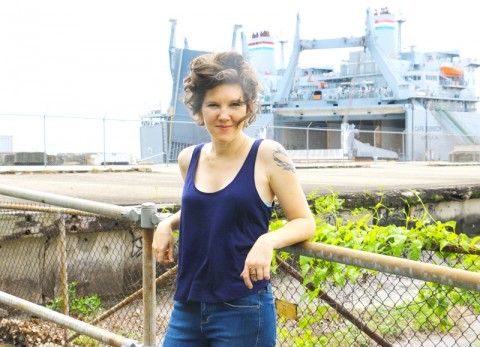 Hayley Finn: Could you talk about the origin of Jeune Terre and why you decided to write it?
Gab Reisman: Louisiana’s coastline is disappearing quick, at a rate of about a football field of land an hour.  Every five years the state puts out a new master plan of coastal protection projects to battle all this vanishing. When the last master plan came out in 2016, my partner was working for a restoration non-profit very much in the middle of the rollout. The play follows the small, bayou town of Jeune Terre as they learn they’re not going to get a ring levee they were promised in the last master plan. The state, essentially, is giving them up to the water. Jeune Terre also follows a theatre troupe that lands in Jeune Terre to make a play about local pirate Jean Lafitte. In researching Lafitte, it seemed the more I learned about him the less I knew. Every account contradicted the last. Ideas on the best way to save Louisiana’s coast are nearly as contradictory. I was interested in exploring our relationships with both place and truth. How are we living inside a complex legacy of piracy and environmental missteps? How can we do right by each other regardless?

HF: In many of your plays ‘place’ is figured prominently. Could you talk a little bit about that theme in your work?
GR: I love geography, and I’m constantly curious about how place informs personhood and the responsibility we have to where we’re from. The fictional town of Jeune Terre is based in large part on Jean Lafitte, Louisiana. My brother was docked in Jean Lafitte in 2005 on a theater barge not dissimilar to the one in the play. Like Jeune Terre, Jean Laffite found out last year that they were going to lose a ring levee they’d been promised. Led by their mayor, they’ve been actively pushing against the narrative of so many other bayou towns. Storm after storm, they’ve rebuilt their school, a community center, a pirate museum, kept their grocery store open. There are towns in coastal Louisiana that have been washed away entirely by storms. Many of the ones that are left are shells of their former selves — weekend fishing camps up on poles but not much sense of community. Even though they keep getting battered, Lafitters keep rebuilding. They believe so ferociously in the town’s existence, and that it deserves protection.

HF: Would you say that many of your plays deal with social issues?
GR: Yeah, I think there’s no way to separate issues of class, education, and mobility from geography. To me, it feels inextricable. Jeune Terre looks at a conversation that people have a lot in Louisiana: Who gets to say what happens to where we live? Who gets to say they’re from here? I could live in New Orleans in some capacity until I’m 100 years old, but I will never be from New Orleans. Jeune Terre looks at that friction. It also looks at the friction between people and their own dreams/capacities. A lot of the play is sort of orchestrated by this pair of high school check-out girls in Jeune Terre’s Piggly Wiggly. They move through the play as these omnipotent characters — creating sound effects, watching scenes they’re not in — like they’re the ones wroughting this world. I’m interested in the way these spaces of wroughting within a play might create similar spaces in our life. How do they allow us to think differently about our own mobility, or what we’re capable of in the larger world?

HF: What is it that inspires you or motivates you to write for the theater?
GR: I’ve been making plays for most of my life. But I stick with it because I think theater is a kind of church. I try to go weekly, whether I want to or not. Sometimes it’s miraculous and inspiring, and sometimes it just washes over me. I don’t know an art form that provides a better space for empathy, and I don’t know of a better way to challenge social inequity than by expanding people’s capacity for empathy. When you can see yourself inside other people’s stories, you can care about what happens to other people in the world. At its best, the liveness of theatre makes that space not only accessible but holy.

HF: Could you talk about writers that have inspired you?
GR: I’m forever inspired by songwriters like Laurie Anderson or Randy Newman for the ways they use character in their songs, for their embrace of irony, their interest in zeitgeist. I learn so much from muscular, canonical playwrights like Caryl Churchill and Naomi Wallace, and from my contemporaries — writers like Mia Chung whose play Catch as Catch Can blew me away this fall. I’m consistently re-inspired by writers I collaborate with like Katie Bender and Rachel Mars for their use of humor and memoir. I also learn boatloads from seeing devised work. The Rude Mechs’ Method Gun, or Nature Theater of Oklahoma’s Pursuit of Happiness — these non-traditional structures teach me so much about how to embrace irreverence while making theatre feel new.

HF: How did you start collaborating with composer Avi Amon, and what has the process been like for you?
GR: Avi and I met in 2015 when another playwright, Phillip Howze, brought him to see a show of mine in my backyard in Brooklyn. Avi lived nearby, so we started having coffee chats, trying to figure out a project that we wanted to work on together. When I figured out there would be music in Jeune Terre, Avi was first on my list. I loved the arrangements he made with Claire Kiechel for their piece at Humana in 2017. There was a sort of choral dream pop to it that felt like it totally belonged in a play about climate change and pirates.

HF: Have you written a musical before?
GR: No! But I’ve wanted to. I love them, but I have no idea how they work, even though my own writing is largely based in rhythm and the music of spoken words. I always feel like there must be some secret formula I can’t see. And I don’t know when a play with songs becomes a musical. Is there some set point? Does music need to move the story forward? I do know that Jeune Terre is a play I’ve struggled with loving for a very long time. I read this newest draft, which has a bunch of new songs written in, this past weekend, and it made me cry and fall in love with the play in a way I never had before. I think I’m finally embracing all the not knowing, and I’m really excited to work on the piece at the Playwrights’ Center in January.