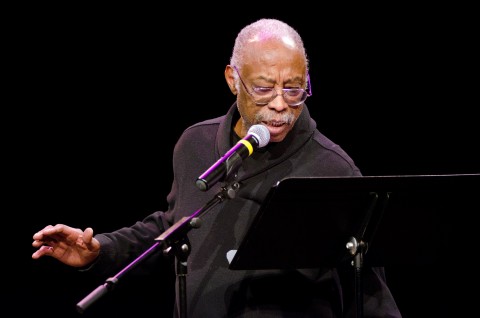 HF: At this point in your career, you’ve written and performed several solo shows. I’m curious to know what draws you to that medium?
Carlyle Brown: Solo performance is probably the oldest art form in the world – the storyteller and the tribe. And what draws me to that medium is that there is no one but you and the audience. The performer’s relationship with the audience is why theater works, is what’s it all about.

HF: The History of Religion has music built into the structure of it. Did you set out to include music in the format, or did that evolve through your process?
Carlyle Brown: Since they are spiritual sutras and they’re spiritual stories, there seemed to be a need for music in my mind, but I didn’t know if that was right or not. Basically, I tried it out and liked it early on.

HF: Was the first time you tried it out at the workshop last year at the Playwrights’ Center?
Carlyle Brown: Yes. Of course, when you think of spirituality you just think of music. It all comes from my interest the African Griot tradition. The traditional storytellers who are the repositories of the history of African peoples in oral culture. Griots start learning their profession at eight years old, memorizing the histories of the culture and stories of famous personages and learning to master the kora, a twenty-one string guitar-like instrument. I consider preachers, spoken word artists, stand up comics, and blues singers a part of that tradition.

HF: When did you get interested in storytelling?
Carlyle Brown: There were a lot of good storytellers in my family. When I was a kid in New York City and we went around the city doing different things, I was the person assigned to narrate our adventures for anyone that was absent. “Carlyle, tell them what happened?” It wasn’t any particular ambition, I just always ended up with that role. I guess that reflects back to why I’m interested in solo shows and the whole idea of what an audience brings to the table, which is their imaginations. It’s as much of a palette to work from as anything. When you go on stage and you’re alone, the audience wants you to be alright, and you can feel it. They probably want you to be alright, because if it’s not going to be good, then everybody’s going to have a terrible time.

HF: What inspired you to write about The History of Religion?
Carlyle Brown: I went to three churches as a kid: Catholic, Episcopal, and First African Methodist. Many of my ideas about arts and aesthetics, philosophy, and politics, the nature of my curiosity came out of that experience. I mean, the three churches were very different.

HF: Could you talk a little bit about the three churches?
Carlyle Brown: The three women that raised me – my grandmother, my mother, and my aunt – they wanted me, an only child, to be a good man, and they thought that my going to churches all day every Sunday would accomplish that. After my confirmation, they said I had a choice to choose whichever church I wanted to go to. So I became a black Muslim, not because I was really interested in Islam, but I figured that was a way to really “fix them”. They were really good about it, though, and they let it happen. I attended the mosque where Malcolm X was a minister. By then I was a teenager, and I thought Islam was very interesting, but the restrictions around women, smoking, and drinking were the very things that interested me far more.

HF: Do you think of yourself as a spiritual person now?
Carlyle Brown: Yeah, but I don’t practice anything, and I don’t think you need to. My conclusion is that religions are all the same. I mean that beyond the dogma, beyond the things that we construct for our own usage, they’re all saying pretty much the same thing with different voices and in different tongues.

HF: In this piece, how did you decide to combine the personal narrative with the mythology?
Carlyle Brown: Well, the Book of Job has always been fascinating to me. I’ve read a lot of Jung, and one of his works is Answer to Job where his hypothesis is the idea of a God as an entity which is inclusive of all things both good and evil. In the Judeo-Christian myth, the Devil is God’s son and he precedes Jesus. In the beginning, an old Testament, ill-tempered, and easily angered God is an infantile consciousness with a capacity to grow and make mistakes. What Jung is suggesting is that God’s relationship with Job is what brings God into consciousness, into compassion, empathy, and love.

HF: What do you want audiences to be thinking about after seeing your play?
Carlyle Brown: Well, there’s no answers to these kinds of questions, right? There’s no empirical evidence. You have to believe. You have to have faith. Religious texts are the most extraordinary prose created by the human imagination. And there’s the challenge of heightened language and spiritual authority. These are some of the things I wanted to explore in this piece in terms of the legacy of the griot.

HF: How has your relationship with theater changed, and have you changed how you interact with theater?
Carlyle Brown: I don’t know. It’s yet another mystery. I know I’m changing. Getting older, if nothing else. And the thing about getting older is that over time you see how things play out. You look around and see who’s left. There will be some stories in that.