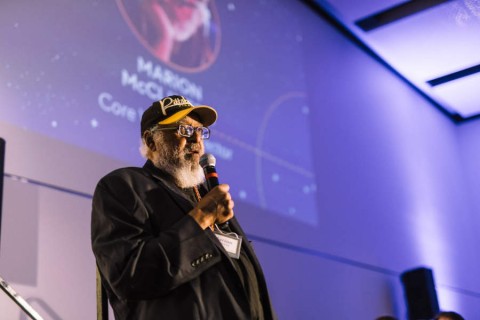 As an actor, director, playwright, and mentor, Marion’s devotion to the art of theater was absolute. Helming productions for over 20 years, nationally and internationally, he was an Obie-award winner and a Broadway legend, nominated for a Tony, winning an Olivier and an Audelco. He was considered the premiere August Wilson director, directing several of August’s plays, from regional premieres to Broadway runs. His work later in life, in Minnesota, was heralded and he would often say it was his best work. He was hugely important to the Playwrights’ Center, one of only seven artists in the Center’s close to fifty-year history to receive lifetime support as a legacy Core Writer. “Legacy” is an apt term when talking about Marion, whose impact on the American and Twin Cities theater landscape is immeasurable.

In the wake of Marion’s passing, a group of friends and loved ones have decided to launch a Legacy Fund in honor of Marion and his immense
contribution to the theatre community in Minnesota and beyond.

The goals for the Fund include:
1. Creation of a fellowship/scholarship for emerging actors, writers and directors.
2. Creation of an annual event celebrating the life and work of Marion.
3. Creation of a park bench in Marion’s honor.
4. Creation and placement of Marion’s archives and materials at a library to be accessible to the community.

Generations and generations from now, there will be people making theater who are doing so because of Marion, because of how generously and passionately Marion created; because he believed Black stories belong on stages of all sizes, and told those stories with nuance and empathy; because he had confidence in his aesthetic and an eye for talent. Because he fostered authentic and long-term collaborations, always challenging his collaborators to be bolder and more truthful.

There are so many theater artists, in particular artists of color, who got their start and stuck with it because Marion believed in them. Marion talked about this lineage, about “the blood of those who came before me, who fought outrageous battles in outrageous times.” Marion’s blood will always run through the veins of American theater, the force of his remarkable life like a wind at our backs, pushing us toward something more challenging and profound; something that would make Marion proud.