McKnight Fellow in Playwriting Rachel Jendrzejewski is doing some theatrical experiments this week at the Playwrights' Center with Terry Hempfling and John Marks. Learn more about Rachel in this interview:

I feel like this question is a trick question! is there such a thing as an unusual place for a writer to find inspiration? every possible answer that comes to mind for this question, wild or mundane, feels like very predictable usual territory…

What do you learn from collaborating with people who are new to theater?

how to break my habits. how to sharpen the senses. how to listen and think and empathize beyond my own limited experience. how to stay on my toes. how to articulate things that are hard to articulate (or at least work on trying). how to give. how to return to beginner's mind. how to imagine something beyond what I would ever imagine alone. how to practice being in community. how to not romanticize community.

You collaborate with musicians often. What does music bring to the theatrical process?

well, first of all, most of my work is developed in collaborative processes—with musicians, dancers, visual artists—in which the sound, movement, images, text, and structure are all developed alongside and in service to each other. I prefer working this way over treating the script as some kind of sacred originating authority; at heart, it’s a practice in working horizontally rather than hierarchically.

music also expresses things that text just can't. I'm always interested in breaking language, experimenting with how it can function beyond familiar human habits of meaning-making, as in poetry, tuning into other dimensions of knowledge and experience and awareness. so I love stretching my own relationship to language by writing for and in conversation with music. and sometimes I realize what's really needed is to just strip away all the words and make more nonverbal space.

I also find that audiences tend to really trust music. whether by nature or nurture or both, they almost always know they can have an experience of music without needing to "get" it in any kind of literal, logical, explicable way (of course, whether they "like" the music or not is another question). unfortunately, that's just not always the case with theater; when a play doesn't operate according to certain storytelling norms or theatrical conventions, many audiences feel more anxiety about whether or not they "get" what it's doing or saying instead. as an experimental writer, I'm very interested in making sure my audiences feeling welcomed into the exploration with me—so music sometimes can serve as an inviting portal, a hospitable signal that perhaps something different is happening, and that perhaps there's not one single "right" way to experience it.

not really until my mid-twenties. I grew up in a rural area and honestly wasn't aware of playwriting as A Thing Living People Do until college. I started school at Hamilton College and suddenly I was reading August Wilson and Paula Vogel and Tony Kushner and so many other great contemporary writers—it was such a revelation (thank you, Mark Cryer)!

years later, I joined the staff at Cornerstone Theater Company in Los Angeles, where I had the honor of observing and supporting all kinds of extraordinary writers in their processes—Alison Carey, Michael John Garcés, Sigrid Gilmer, Yehuda Hyman, Julie Marie Myatt, Octavio Solis, James Still, Sarah Ruhl, Shishir Kurup… as I was (very slowly and shyly) starting to investigate my own writing, I met Guy Zimmerman, who incidentally was preparing to teach a new Padua Playwrights studio course with Coleman Hough right in the building where I lived. they kindly let me barter administrative work in exchange for studying with them—and it was an absolutely phenomenal experience. from there, I was hooked.

Finish this sentence: If I weren’t a playwright, I would be…

a painter, or a clarinetist, or a mail carrier, or a librarian, or a curator, or an astronomer.

one of ten million answers to this question: I recently saw Nick Cave perform in one of his Soundsuits, with a choir led by Brenda Wimberly and Helga Davis—it was lifechanging. I can't quite put the "why" into adequate words, but it's something about Cave's wild imagination and expansive interdisciplinary approach to form and palpable generosity, all working against and through the immense pain of this world. his work is profoundly intimate and epically ambitious at the same time. it's playful and fierce and funny and smart and sacred. and man, those voices. it all cracked me open in the best of ways.

What is the best advice you’ve been given?

exercise and drink a lot of water! I'm serious. these tasks affect everything, including writing (and how one feels about one's writing at any given moment)—and yet it's way too easy to not do them, especially during the deep dark cold of winter. also, when facing a big risk or feeling scared about virtually anything, remember that we're all going to die before long—our time on this planet is so short—so why not live as fully and as lovingly as possible right now?

What is your advice for finding or creating and artist community?

pursue the work that you really want and need to pursue. even if it feels lonely for awhile, eventually you'll start connecting with kindred people. go see other people's work as much as possible and talk to them about it. help each other survive. share resources and knowledge and meals. read and workshop projects in each other's living rooms and kitchens. create opportunities for each other.

What is something you’ve never seen onstage that you would like to?

come see my next project to find out!!

silly with people close to me and painfully shy around everyone else. also pretty nerdy. I aspired to have as many penpals as possible. one year, I asked Santa for a filing cabinet. 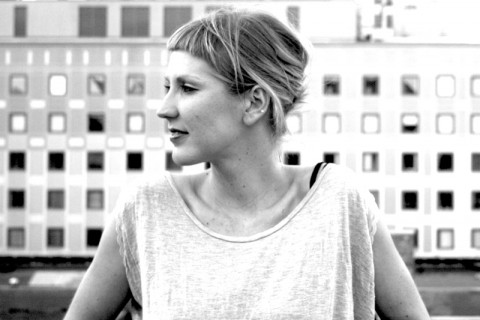